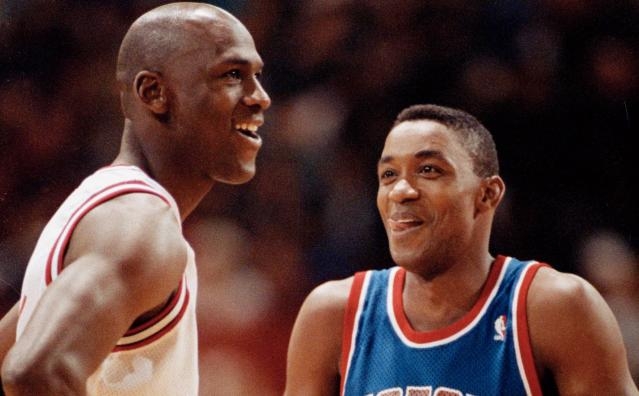 Michael Jordan and Isiah Thomas have been at odds for years. The disdain between the two basketball legends stems from their playing days. While Thomas got the better of Jordan early in his career, once MJ got some quality help he was able to sweep the Pistons out of the playoffs in 1991. In the waning seconds of that matchup, Thomas led a walkout where the Pistons left the court without shaking the hands of the Bulls. That along with the “Jordan Rules,” a set of rules defensive-minded strategies implemented by the Pistons to limit Jordan’s scoring prowess, all played a role in Jordan referring to Zeke as an a—hole in his ESPN docuseries, “The Last Dance.”

Earlier this week, Thomas tweeted out some of things he said to COSMOTE TV concerning he and Jordan’s volatile relationship, and how he was portrayed in the award-winning docuseries.

“When I was watching “The Last Dance,” I’m sitting there and I’m watching it with my family and I’m thinking everything is good. And then this guy comes on television and he says that he hates me, and then he calls me an a—hole.”

“And then I proceed to watch a whole documentary about him being an a—hole. I’m like wait a minute, time out. Until I get a public apology, this beef is gonna go on for a long, long time, cause I’m from the west side of Chicago.”

Thomas explanation for the walkout was the when the Pistons finally broke through and beat the Celtics in 1988, they walked out on them. Jordan says keep that lame excuse.

“Whatever he says now, you know it wasn’t his true actions then.”

Did Jordan’s Disdain For Thomas Keep Him Off Of The 1992 Dream Team?

The 1992 Dream Team is the greatest team ever assembled, and based on play and accolades, Thomas should’ve been a part of it. But he wasn’t, and many believe it was MJ’s doing that he wasn’t. For years now Jordan has vehemently denied he played a role in Thomas not being on the team.

In his 2012 book, “Dream Team,” longtime  Sports Illustrated Jack McCollum, wrote that Jordan told Rod Thorn, a selection team member and the man who drafted Jordan to Chicago this ….

“I don’t want to play if Isiah Thomas is on the team.”

Thorn had a rebuttal saying MJ didn’t play a role in Thomas not being on the team. In a 2019 interview on ESPN’s Golic and Wingo, Thorn said this ….

“There was never anything in my conversation with Jordan that had to do with Isiah Thomas. He said I’ll do it. …. Isiah’s name never came up during that conversation. He never backtracked and said he didn’t want to do it from that time on, to those of us in the NBA office.”

Jordan Upstaged Zeke In College And The NBA:

In College Thomas’ coach, legendary Indiana coach Bobby Knight, was smitten with MJ whom he coached on the 1984 Olympic Team. He even told reporters this before MJ ever stepped foot on an NBA floor.

“Michael Jordan is the greatest basketball player I’ve ever seen.”

While his former player Zeke led his team to the 1981 national title, Knight was on board with MJ.

Then Jordan comes to Zeke’s hometown and wins six NBA championships, this is much more deeply rooted than Jordan calling him an a—hole.