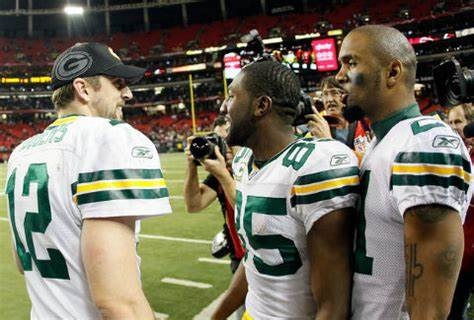 The Green Bay Packers are a mess, losers of four straight and currently 3-6 things aren’t looking too good Wisconsin. In one of the strangest NFL seasons we’ve seen in quite awhile, the Packers are awful and reigning two-time MVP Aaron Rodgers looks as if he’s falling off the proverbial cliff. In last week’s road loss to the Lions, Rodgers was intercepted three times, tied for the most times he’s ever been picked in a single game. What’s more alarming is where he threw those interceptions, in the redzone. That’s usually where Rodgers is amongst the best, if not the best in the league.

The interceptions were all bad reads by ARod, but he didn’t seem to take full accountability for them during his weekly appearance on “The Pat McAfee Show.” That lack of accountability caused Rodgers former teammate Greg Jennings to speak on how he’s doing exactly what Packers legend Brett Favre did. During an episode of “The Carton Show, Jennings said Rodgers use to complain about how Favre always avoided the criticism and that made unaccountable for his actions.

“Brett, he was one of those guys, he never got… no one ever thought it was his fault.”

“And at some point…. and we understood, like, Brett Favre, he’s the face of the NFL, blah, blah, blah, when I first came in.

“I recall a young Aaron Rodgers identifying that and saying, I’m never going to do that. I’m not gonna be that. And then you grow, you have success, and everybody starts to tell you how great you are, and everybody in the locker room are your greatest accountability.

An impassioned Jennings speaking from a point-of-view most have no recollection of as he was in the Packers locker room with both of these all-time greats, but divas at times.

Why Did Jennings Feel The Need To Set The Record Straight?

Jennings was calling out Rodgers for his comments, about how he doesn’t care what so-called analysts and experts had to say. While he did admit to playing pretty bad, which he did. Rodgers still didn’t fully own up to his play. Rodgers talked about one of his picks and he pretty much placed the blame on the receiver not himself.

“I’ve thrown TD passes many times on that, and I don’t give sh-t what any of these experts on TV have to say.”

That’s just arrogance and lack of accountability speaking, what Jennings is speaking of.

ARod’s Act Of Blaming Receivers Is Getting Old:

Respect for Rodgers greatness goes a long way, but his act is reportedly wearing on his teammates. Per ESPN’s Jeremy Fowler this is how the blame game has some feeling in GB.

"Some of the young wide receivers have been painted as scapegoats for the Packers problems, despite Aaron Rodgers absence during OTA’s, which isn’t sitting well with some there.”

Pleasing Rodgers is nealry impossible, it’s as if no one or nothing is good enough, and from the looks of things that won’t change anytime soon.