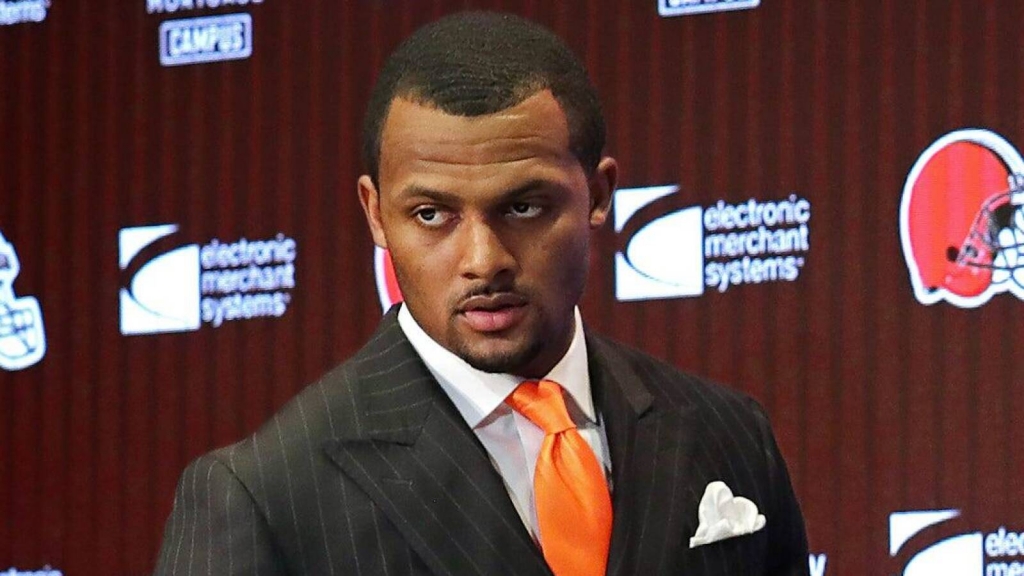 How does a man spend a small percentage of $230 Million while having a 12-week vacation? Cleveland Browns quarterback Deshaun Watson buys a $5.M house.

Watson practiced with the Cleveland Browns for the first time since being suspended for 11 games. While he’s been catching a lot of blowback over his legal matters, he’s also had plenty of time on his hands to spend his big bag of cash he received compliments of a Browns team desperate for a star at the QB position.

Watson took that financial come up and his time off and bought an insane mansion for what is really a few pennies when you take into account the type of cash the Cleveland Browns are paying him.

The massive estate he purchased resides in Hunting Valley and features 5 bedrooms, and 8 bathrooms (5 full), and the home is listed at 17,200 sq. ft. Watson's super home “includes its own fitness center, theater, pool, tennis and volleyball courts, all on 5.8 acres of land, according to real estate records” according to Cleveland.com.

Is Deshaun Watson Staying In Cleveland?

This purchase also cements Watson’s longevity in Cleveland. He signed a 5-Year, $230 Million contract in the offseason after the Browns acquired him in a trade with the Houston Texans. The contract is fully guaranteed, the first fully guaranteed contract of this amount in the NFL. Watson is paid in full.

Watson was looking for a change of scenery in Houston amid his sexual assault scandal. The scandal has kept him sidelined for the majority of the season, though he should be coming back after next week to make his regular-season NFL debut. The team notoriously gave him that massive contract in order to ensure that they have their franchise quarterback for the long-term future.

That money also indirectly helped pay off the multiple lawsuits with women who were allegedly sexually assaulted by Watson. Watson was never arrested or charged and denied wrongdoing, but a disciplinary officer for the NFL decided he should be suspended six games for violating the league's personal conduct policy. The League didn’t like the punishment and the suspension was extended five more games.


The Browns, who are 3-6, are 3rd in the AFC North, and while it looks like their season is done, nothing is set in stone in that Division.

Deshaun Watson’s return may turn the tide for the Cleveland Browns who can use some top-tier quarterback play. Many believe Watson will not play to his full potential upon first returning to the Browns, but he just may be the spark plug they need. He would surely be an upgrade to Jacoby Brissett, who has done an adequate job in Watson’s absence.

Also, putting the ball back in Deshaun Watson’s hands will help out the run game. Not only is Watson a capable scrambler and an elusive player, but the Browns will most likely have him throwing anywhere from 25-35 passes a game which will limit touches for the NFL’s leading workhorse Nick Chubb, allowing him time to rest and stay fresh.

Having a capable passer and signal caller under center allows the team to become more versatile in their offensive attack. The Browns will be excited to roll this offense out for years to come.

Even if the Browns don’t make the playoffs this year, once Watson returns from his suspension, the Browns will still have him for 4 years. He’s only 27 and should be healthy and eager after sitting out for an extended period of time.

Watson has found his home in Cleveland, and he’s ready to start winning with the Browns. Hilariously enough, Watson’s first game is going to most likely be when he returns to Houston for a matchup with his former Texans team.

Talk about a return.

Watson will be more than eager to take on his former team and establish himself as the long-term solution for the Browns. He’s willing to bet the house on it.