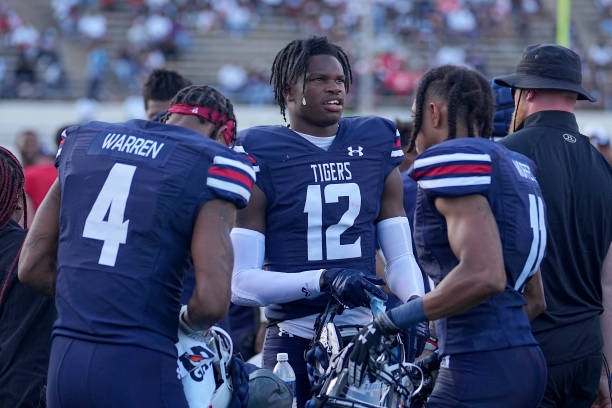 Since Deion Sanders arrived at Jackson State in 2020, the Pro Football Hall of Famer has preached being dominant. That’s exactly what his Jackson State Tigers did in completing their first undefeated regular season, 11-0, in program history. In Saturday’s regular season finale, fans finally got to see what 2022 No.1 overall recruit Travis Hunter could do on both sides of the football. The dynamic two-way player recorded a pick six on defense and receiving touchdown on defense, on both plays Hunter demonstrated the type of skills that made him the nation’s top recruit.

A happy but even-keeled Sanders wants his team to take pride in the accomplishment, but he also wants them to continue to grow and know that’s “not enough,” and isn’t the end goal for 2022.

Coming into the 2022 season Coach Prime stated over and over that he wanted to see his team dominate each and every week of the season. And while they had some sketchy moments at times, they outscored opponents 413-101. Under first-year offensive coordinator Brett Bartolone, the offense shined weekly with quarterback Shedeur Sanders, the reigning Jerry Rice Award winner at the helm. On Saturday the strong-armed Sanders broke the program’s single season touchdown record with his 32nd touchdown pass which went to Travis Hunter.

On defense under defensive coordinator Dennis Thurman they got after opponents with a devastating pass rush and aggressive approach weekly. And while Hunter wasn’t available for a stretch of the season as he recovered from nagging injuries, they turned him loose in Saturday’s win over rival Alcorn State, and he produced with a pick-six. He even channeled his coach on the return.

Tigers are now 26-5 since Sanders arrival, including two SWAC East titles, one SWAC championship and one Celebration Bowl appearance.

The SWAC’s Western division is still unsettled until Southern faces archrival Grambling State on next week’s legendary Bayou Classic. A win by the Tigers means they face JSU in Jackson in the SWAC championship game. A loss by Southern then brings in a whole host of other scenarios.

The winner of the SWAC championship will then travel to Atlanta where they’ll face the MEAC champion North Carolina Central Eagles, who are led by dual-threat quarterback Davius Richard.