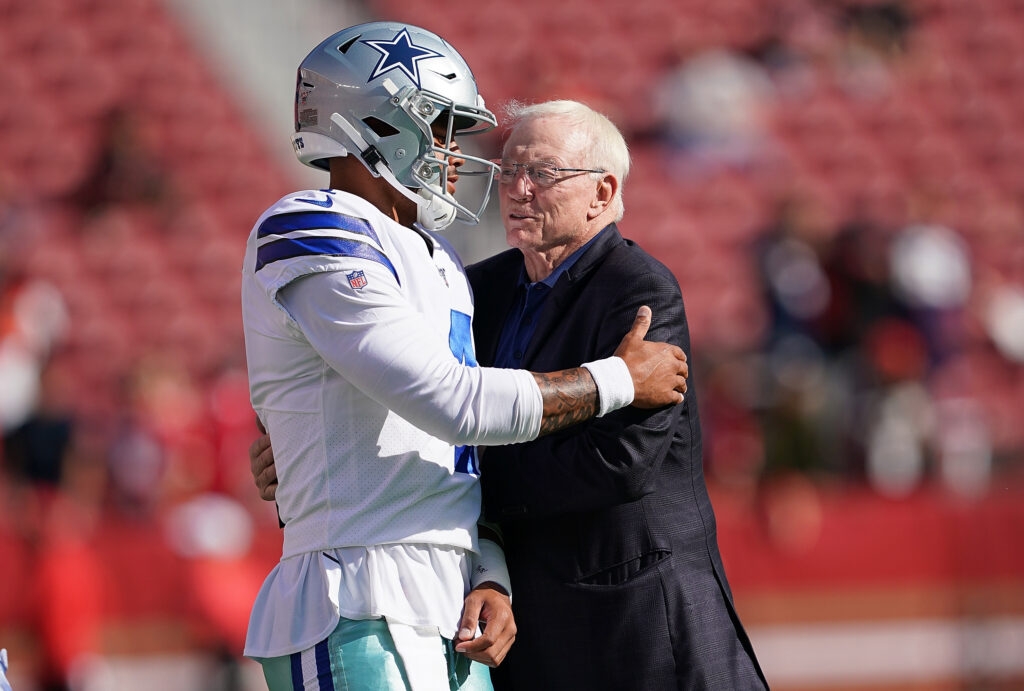 Immediately following the Cowboys 40-3 dismantling of the Minnesota Vikings, Cowboys owner Jerry Jones said his team is definitely a Super Bowl contender. In fact, Jones took it a little further in his postgame presser saying this ….

“A resounding yes. Yes. Unequivocally. I think we’ve had adversity. We very easily could have more adversity … Yes, I think if use the experience of what we’re having in the season, then we’re going to be playoff ready. But I sure do think that what I see out here right now is the team like that you could go get a Super Bowl with.”

While Jones, is correct in his remarks as it pertains to his team being a SB contender, he should leave that upto the pundits to discuss or mention. There’s no need to add any extra pressure on his team, who in the past have succumbed to that pressure and failed to live upto the expectations placed on them.

Sunday’s dominating win at the then 8-1 Vikings was for sure a big one, but it shouldn’t have Jones so quick to say that they’re Super Bowl contenders.

In Jones’ Opinion Vikings Game Was A Measuring Stick:

Following a loss to the reeling Green Bay Packers one week prior, Jones says he felt Sunday’s game in the Twin Cities would go a long way in telling what type of team the Cowboys really are. Are they that team that blew a 14-point lead in a loss to the Packers or are they the team that won by 37 on Sunday?

“I too thought this game was gonna tell what we are. I don’t know that we’re that. I really don’t. But I know this, that we’re not a team that responds when it’s wounded. Everybody thought against the Packers that we underplayed, and I think you saw that happened when we got out here tonight and the team all came together. We’ll build from this.”

Cowboys Are Definitely SB Contenders In A Watered Down NFC:

Jones comments do ring true, as the Cowboys are definitely SB contenders along with the Eagles, Niners and Vikings as of now. And that’s not really saying much when you consider the way the Vikings looked in Sunday’s loss. But with Aaron Rodgers and Tom Brady finally losing to “Father Time,” reigning Super Bowl champion Matt Stafford and the Rams falling flat on their face and Russell Wilson departing for the AFC. It has opened up an opportunity for others to have a shot to make it to Glendale, Arizona in February 2023.

And while the Cowboys are habitual underachievers, you have to take into consideration those factors plus a dominant defense led by reigning Defensive Rookie of the Year, Micah Parsons, and an offense that seems to have found it’s identity as a run-first playaction team.

Is that enough? Only time will tell, but on thing they don’t need is their owner adding pressure to the situation. It has been 27 years since the franchise last hoisted a Lombardi Trophy.