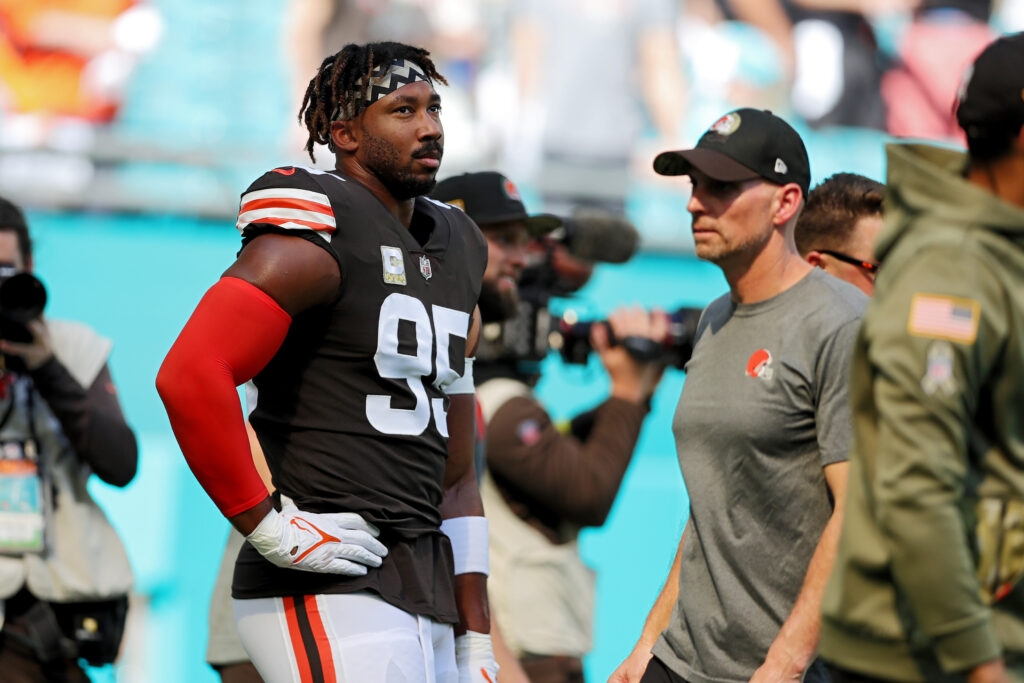 Following Sunday’s 31-23 loss to the Buffalo

Bills, Cleveland Browns defensive end Myles Garrett voiced his frustration with the team’s 3-7 record. When asked about his emotions, Garrett had this to say.

“Just disappointed. We’re too good of a team to have this record we have. It’s frustrating…. a lot of emotions going through your head when you let another one slip away.”

Following the team’s fifth loss in six games, Garrett’s body language was one of dejection, but he still feels the team has a shot.

“We’re not out of if. If we do what we’re suppose to and get rolling, then we still have a  way to make it. We just have to keep on fighting, keep on going forward and try to get in that win column.”

At 3-7 Garrett’s belief of still being in the playoff are extremely meniscule, but as the face of the franchise he must still interject hope amidst the despair of a season gone awry.

Are The Browns Wasting The Core Of The Team’s Prime? Garrett Comments Say They Are

The Browns possess a solid young core and with star quarterback Deshaun Watson slated to return after the next game, things have to be looking up. That could be why Garrett made the comment of not wasting time as it pertains to that young nucleus of the team.

“We have to make sure we don’t waste the talent that we have in its prime right now. We still have a lot of opportunities left to keep fighting to put ourselves in position to go to the playoffs. It’s not as much in our hands as we want it to be, but it’s definitely not out of the conversation just yet.”

Garrett also talked about the team struggles to force turnovers beginning in practice because the team rarely goes over it.

Those comments didn’t seem to sit well with Garrett’s head coach, the embattled Kevin Stefanski, who was just NFL Coach of the Year in 2020.  But with back-to-back losing seasons on the horizon the pressure is mounting.

“Myles speaks for Myles. I’ll talk to him about it. We put a lot of emphasis in our building on takeaways. We haven’t gotten them.”

Two varying explanations of part of the reason the team is sitting at 3-7, but the biggest reason is not having Watson at QB.

In a league where the game is predicated on benefiting the offense, the QB position is vital and not having Watson whom the team signed to the largest fully-guaranteed deal in league history has been a huge reason for the team’s struggles.

In a division with Lamar Jackson and Joe Burrow, and a conference with Patrick Mahomes, Josh Allen, and Tua Tagovailoa, good QB play is key and Watson will provide that when he returns.

Maybe then will see the Browns team we’ve been expecting the last two seasons.