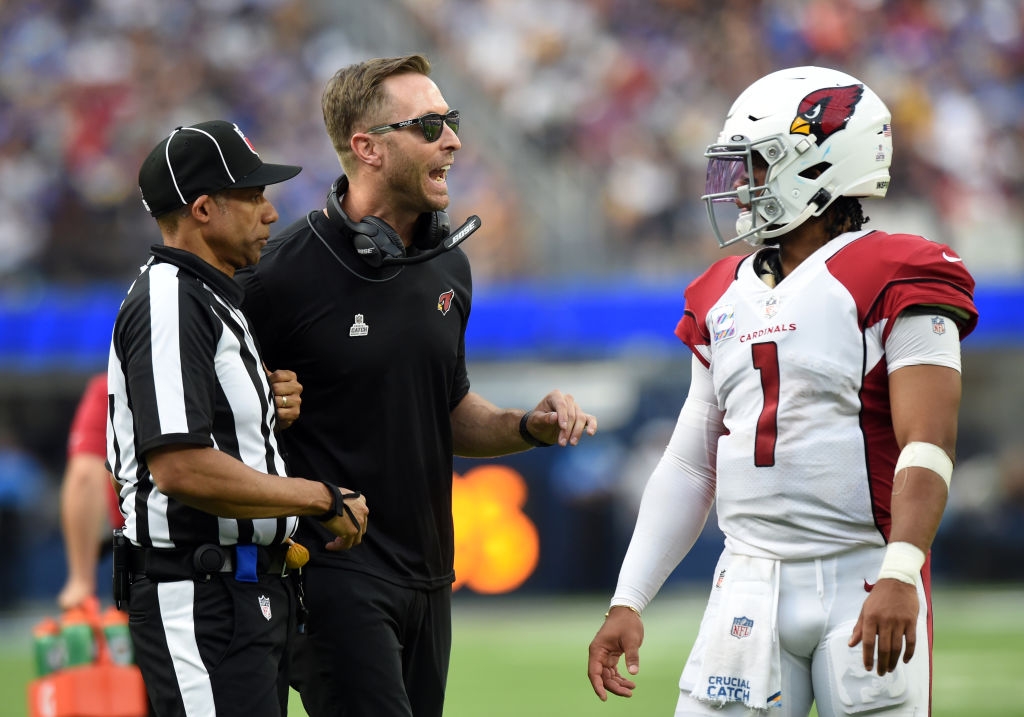 Cardinals QB Kyler Murray has never been one to mince his words. The diminutive dynamo has constantly questioned head coach Kliff Kingsbury and the team’s offense. He’s also been quick to show bad body posture towards his coach and teammates when things go as planned. So nothing he says concerning the Cardinals is really all that surprising, but the frequency of how much he does it is very alarming. Following Sunday’s 25-24 loss to the Chargers, an agitated Murray told reported this when asked about some of the team’s struggles, including a first half interception that looked like a mixup between he and his receivers

“No, that wasn’t for Hop, actually. Schematically, I mean, they kind of, we were kind of f—ed.”

“The whole game we pretty much had what we wanted. Our four-minute offense execution lost us the game. Defense, I don’t think they should’ve been put in that situation.”

When Murray talks scheme it’s a direct shot at head coach and playcaller Kliff Kingsbury, something we’ve come accustomed to with Murray over the duo’s tenure together.

Earlier this season, Murray and Kingsbury had a pretty heated debate during a game in October where Murray yelled at Kingsbury and told him this …

“He sometimes gets real animated over on the sidelines sometimes. It’s never calm down, we’re good, we are going to make it right and we end up scoring so that was good.”

Kingsbury tried to deflect from it ….

“We had a difference of opinion. Yeah, he said I didn’t look good on TV and acted kind of fiery. So, I don’t know. It’s the Gen-Z thing on TV calm down, but I like showing emotion.”

There was a time during the preseason where Kingsbury who’d grown tired of Murray’s questioning of playcalls, let him call plays to show him how difficult it is.

“I just wanted him to know that, hey, this sh-t ain’t easy.  Every now and then, he starts shaking his head when I’m calling it in there, I’m like, alright big dog.”

Murray failed miserably, actually confusing the quarterbacks after giving them the play he continued to talk them during the play. Which in turn made it difficult for them to focus.

“I would not want to play for Kyler Murray, if I was a quarterback and he was a coach.”

Murray And Kingsbury Are Joined At The Hip:

This past offseason Cardinals management extended both Murray and Kingsbury, meaning both will be in “the valley of the sun,” until at least 2027, barring any unforeseen changes. So it’d be advantageous to both parties if they can work through their differences, for the betterment of a consistently underachieving Cardinals team.