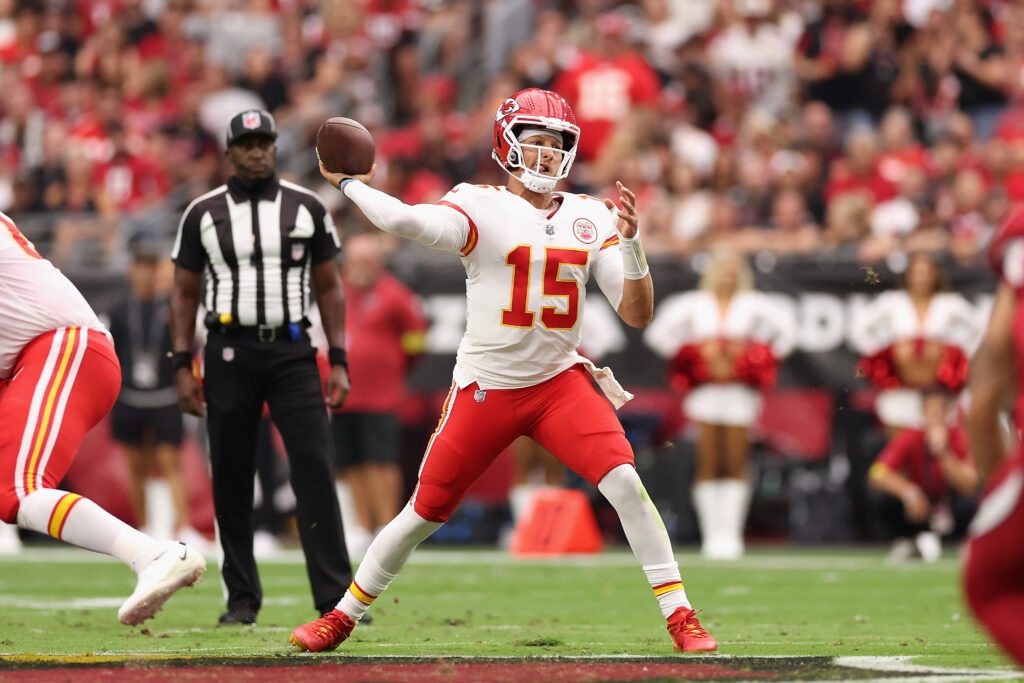 Patrick Mahomes has been arguably the best QB in the NFL for a couple seasons. That assumption has never looked more crystal clear than this season as the maestro of the vaunted Kansas City Chiefs has led the team to a 9-2, which is tops in the AFC. Mahomes has done this minus superstar receiver Tyreek Hill, who was traded to the Dolphins in March.

During a recent episode of the “Rich Eisen Show,” Eisen raved about Mahomes’ evolution and maturation this season.

“You take a look at the standings, as a matter of fact, and rubber’s meeting road in the AFC with the Chiefs. No Tyreek Hill, no big whoop, 9-2. They won nine of their first 11.”

“A loss to the Indianapolis Colts. That will still be a head scratcher when the season is done, no matter what happens now and at the end of the season.”

The Chiefs have been dominant in road wins at the Cardinals and Buccaneers, and pulled out tough nail biters against the Raiders, Titans and Chargers. Through it all, the play of Mahomes has been the main reason for the team’s success though 11 weeks of the season.

This far this season Mahomes has passed for nealry 3,600 yards, 29 touchdowns and just eight interceptions. He’s on pace to break the single season yardage mark.

Coming into the 2022 season Mahomes knew he had to get better in a few areas, because without the gamebreaking Hill, he’d have to play with a more methodical approach. That meant less risky throws and more of taking what the defense gives you. That’s exactly what Mahomes has done, with nine players  having at least 12 receptions, and as many as 17 different players having at least one reception from his strong right arm. In the end that approach has helped him increase his completion percentage and cutdown on the mistakes.

That group is led by all-world tight end Travis Kelce who continues to add to his already glowing Hall of Fame resume. This season he’s 73 catches and 12 touchdowns, meaning every six times he touches the football he also touches paydirt. The addition of JuJu Smith-Schuster has also helped soften the blow of losing Hill, while he’s not nearly as explosive, most aren’t, he’s a tough, sure-handed, reliable weapon who can run and has taken some pointers from Kelce on route running.

If you ask Mahomes, about this season he’ll tell you while they’re playing well, last season’s AFC Championship choke job at home to the Bengals still stings. In fact, the Chiefs loss to the Joe Burrow-led Bengals twice in a month by three points, and each time they blew big leads. None hurt more than the second one.

Bengals Have Had Mahomes And Chiefs Number:

This coming Sunday, Mahomes and the Chiefs will look to right their wrongs against the defending AFC champs who really believe they’re the better team. Mahomes who’s a student of the game, knows they’ll need to avoid the same mistake and pitfalls that cost them both matchups last season.

“Man, it’s not a good place. I mean they’d beat us. I played terrible in the second half. And we lost at home … So, we’ll be ready to go next week for sure.

While it’s only one game, a win will go a long way for KC’s psyche and Mahomes continued MVP candidacy.