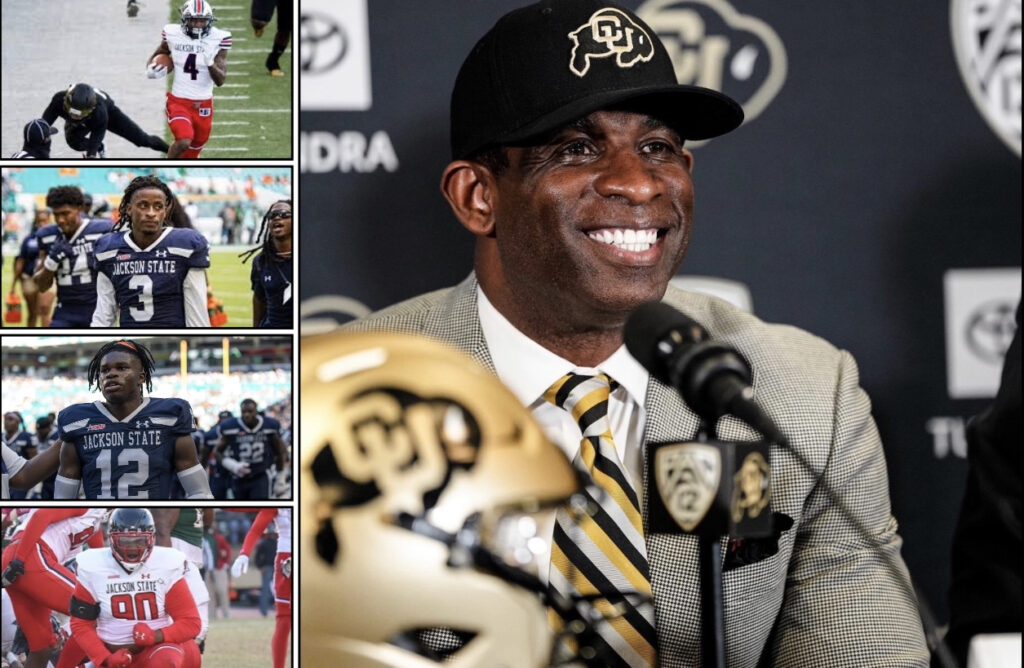 Who’s Deion Taking With Him To Colorado?

Deion Sanders leaving Jackson State for Colorado will have a ripple effect on JSU’s roster going forward as the expectancy is for as many as 10-12 players to join him in Boulder. The first domino to fall was his son and quarterback Shedeur Sanders whom he announced to his new team as their quarterback.

That sounds good but that’s also one of the main reasons Sanders took the Colorado job. He and Shedeur have aspirations of him playing in the NFL, and staying at Jackson State wasn’t gonna elevate him to the level that scouts would have him high on draft boards. Not many HBCU QBs get a shot, in fact last year’s SWAC offensive player of the year, Aqeel Glass who did some amazing things at Alabama A&M went undrafted. He did have a stint with the Buccaneers during minicamp, but was cut following that.

Getting Shedeur against Power Five defenses weekly was vital and now he’ll have that opportunity to show his abilities on the highest level.

Son Shilo is reportedly beefing with his dad for taking the Colorado job and is undecided on what he’s gonna do.

“From the intel that I was able to gather while I was there, Shilo’s upset … Shilo has been invested in the city of Jackson and in the school. … So when he got the news that his father was moving on to Colorado.”

Shilo has NFL aspirations, but it isn’t imperative for him to leave, he plays safety and the chances of him staying or going doesn’t really increase of decrease.

The 2022 No.1 overall recruit shocked everyone when he chose Jackson State overtons of Power Five offers. His move was viewed as unheard of for a player of his stature. Hunter has stated he chose JSU because he wanted to be coached by the best, and that Sanders is, having been arguably the greatest cornerback to ever suit up. Hunter happens to play that position, and in no way, shape or form is Sanders leaving him in Jackson. He’s the recruit that hyped up the Coach Prime train and he’s gonna shine in Boulder, focusing solely on playing cornerback, instead of his two-way play at JSU. First-round pick on the horizon.

Two Highly-Recruited Receivers Are On Their Way From JSU:

Quaydarius Davis was a four-star recruit in the class of 2021. Sanders then added Kevin Coleman a top-50 recruit in the 2022 class, in fact Coleman was the No.1 ranked slot receiver in high school. Expect both of these elite pass catchers to join Sanders at Colorado. They both are NFL prospects who’ll get challenged daily by better competition, bettering their chances of playing at the next level.

Evans was a four-star recruit in the class of 2021 from powerhouse St. Frances Academy who held 41 offers but chose JSU. He’s 6-foot-4 and 320 pounds with pass rush ability. In a conference predicated on offense having an anchor like Warren on the defensive line is vital and Coach Prime knows that. NFL is calling in two seasons.

As for Warren he’s also a 2021 four-star recruit, who had 33 offers out of Lackawanna Community College. Also a Maryland product, Warren is a lockdown corner who’ll likely play opposite of the aforementioned Hunter giving the Buffaloes two man-to-man cover guys from the jump. He’s a pro just like Hunter who’s just as talented but not as hyped.