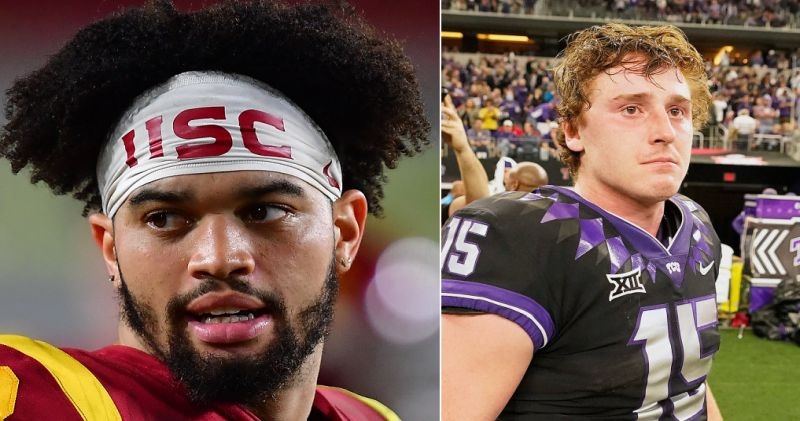 Following the loss Duggan displayed his emotions in his postgame presser saying this….

“There’s nothing more that I wanted than to bring this school a championship. Today, we fell short. I didn’t make enough plays to help us. Offensively to put us in that spot.”

“I wanted that one really bad.

Griffin tweeted out a clip of Duggan’s presser with the caption of ….

“How can you not root for Max Duggan?”

Which is a microcosm of the Horned Frogs program who came from out of nowhere under Duggan and first-year head coach Sonny Dykes to go undefeated in the regular season and punch their ticket to the CFP despite the loss. The Horned Frogs overachieved making them a team many would support for that exact reason.

As if he was making a mockery of Duggan crying or Griffin asking anyone couldn’t root for Duggan. After receiving backlash for his tweet Williams attempted to clarify his tweet and then took the tweet down.

“Wasn’t laughing at Max D!! Happy for him, his journey, his team, and his passion for his school. I feel the same way after we lost this year.”

One person tweeted out that while Duggan

is all about team, Caleb is about himself.

Don’t know where that person would get that from one retweet, but that is what we call a major reach.

Williams And Duggan Are Headed To NYC As Heisman Finalists:

While Williams and his Trojan teammates came up short in their bid to win their conference championship as well, Williams is the front runner to hoist the Heisman on Saturday night in the “Big Apple.” By virtue of their second loss this season to Utah, the  Trojans didn’t qualify for the CFP, but they’ll be playing in the Cotton Bowl. Williams is looking to give USC head coach Lincoln Riley his third Heisman winner, along with his fourth finalist.

As for Duggan the loss didn’t hurt his Horned Frogs team chances at the CFP. They’re the third-seed where they’ll face undefeated BIG 10 champion, Michigan. Duggan is also headed to NYC as a finalist for the prestigious award, and while he isn’t the favorite, him just being here is amazing in itself. Once an overlooked four-star recruit whom many didn’t recruit, has blossomed into one of the game’s best this season. All the stardom and attention hasn’t gone to the Council Bluffs, Iowa product head either. He recently told reporters that he hasn’t really thought about being a finalist. More of his team first attitude.

“I haven’t really thought about it like that. I think it’s something after the trip that I’ll be able to reflect on it. It’s something I’m looking forward to. It’s a huge honor especially for me and my family and for this team in TCU. Just getting the opportunity to go there and put TCU on a national platform. A lot of people will see our story, our program, our scull down here, a small school in Fort Worth that everyone talks about. It’s going to be good.”