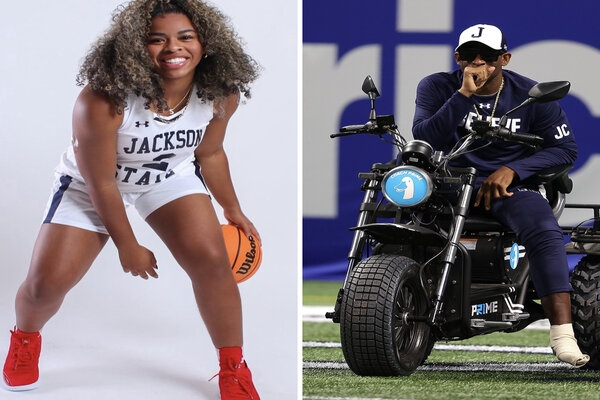 How Does Deion’s Move To Colorado Effect Daughter Shelomi Who’s A Guard On The WBB Team?

Deion Sanders announcement that he was leaving Jackson State to become the head coach at Colorado has many layers to it. One of those layers yet to be discussed is what will happen with his daughter Shelomi who plays for the Lady Tigers basketball team. With Shedeur following his dad as the Buffaloes new quarterback. Oldest son Deion Jr, is coming along to do the social media and videos for the team with his media company, “Well Off Media.” As for middle son Shilo he and dad have reportedly butted heads on the move and he hasn’t made his intentions known as of yet.

During his presser alluded to Shilo saying this.

“I left the safety in Jackson because he’s in the doghouse right now. That’s my other son (Shilo).”

Shelomi is a freshman on the steadily rising Lady Tigers basketball team, and the belief is she’ll stay in Jackson. And that’s mainly because she wasn’t recruited by Power Five programs out of school. While she’s a solid player her skillset fits Jackson State and the SWAC moreso than the tough Pac-12 which features Stanford, Oregon, Arizona, UCLA and Utah.

When the video of Coach Prime and others touring the facilities at Colorado, you could see Shelomi arm and arm with her dad. Immediately the question whether she’d stay or go became a thing. But it’s in her best interest to stay there at Jackson State and be developed by rising head Tomekia Reed, who can harness Shelomi’s abilities as a shooter and scorer.

Shelomi came to JSU believing her dad and brothers would probably be there her entire collegiate career. But even with the change she’s in good hands with Reed and her staff in Jackson. While Shelomi will play a reserve role now and possibly next season, the hope is she’ll be ready to assume a starting combo guard role for the Lady Tigers by year three. As of now she’s shown a bit of her sniper prowess as a knockdown catch-and-shoot player.

And the way things are looking she may still have the aforementioned Shilo on campus with her. But now’s her time to step out on her own and do her thing without dad down the hall. And based on her attitude about basketball she’s gonna be just fine without her dad and siblings around.

Did Shelomi’s Mom Take An Subtle Jab At Deion Right After Colorado Hiring?

Of course Deion is always around his children, but their mom Pilar who happens to be the ex-wife of Deion is also around often to see their children play. She can often be seen at the Tigers football games and even at Shelomi’s basketball games. Pilar and Coach Prime had a pretty ugly publicized divorce that played out in the media. While the two seem cordial for the sake of their children, that didn’t stop folks from trying to decipher a tweet by Pilar that many feel was directed at Coach Prime.

“I’ve always said what you do in private you will eventually do in public. Everything is synergistic, u can’t bleed one way in the house and and then bleed different way outside the house. Everything is Everything. Big or small. There’s a way to do everything.”

Interesting take that may or may not have been directed at her former husband. But it makes for great theater going forward.