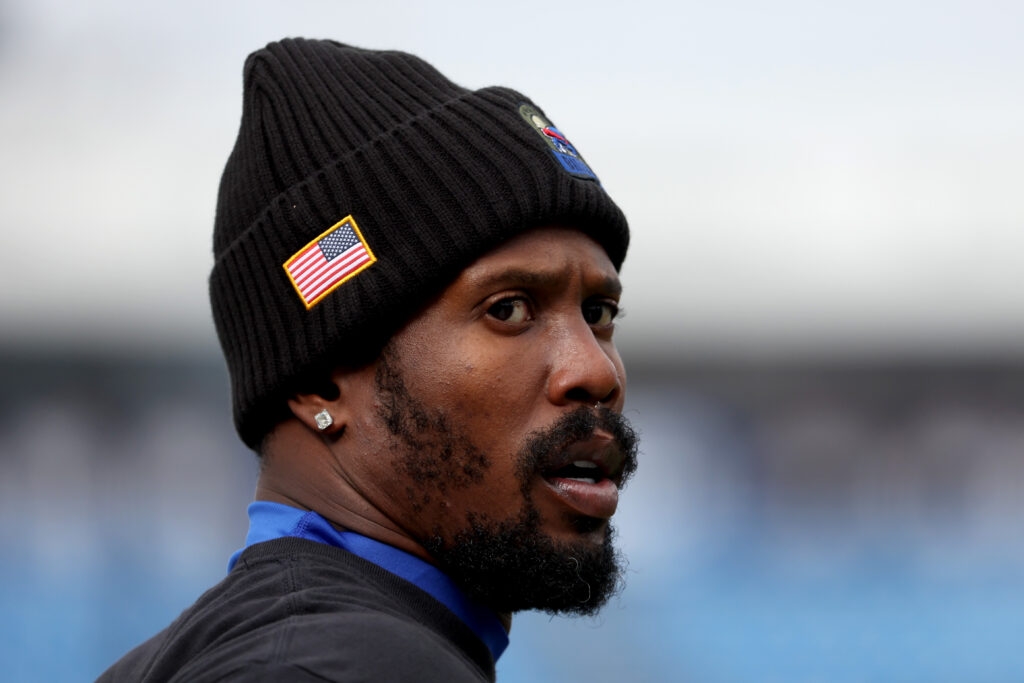 Von Miller has suffered a torn ACL, effectively ending his season and severely hampering the Bills chances of reaching the Super Bowl. In the offseason Miller was signed to bring the one thing the Bills defense has been missing, pass rush pressure. While the unit finished No.1 in the league last season their pressure rate and sacks ranked in the bottom half of the league. The unit is fourth overall this season,  but they rank in the top half in sacks, and are fifth in pressures. A direct result of Miller’s effect on opposing offenses.

The future Hall of Famer has only tallied eight sacks, but is tied for fourth in the league in pressure rate. That stat alone is a huge reason for the Bills defense being so opportunistic.

With the swelling subsiding and a knee scope now able to be done, Bills GM Brandon Beane told reporters that he prepared for the worst.

“I knew Monday night that this was a real potential, you know, crossing our fingers. We were hopeful that it was a scope to clean the meniscus and and scar tissue in there. But unfortunately, when Dr. Cooper went in there yesterday — he did the surgery sometime yesterday afternoon — when he went in there yesterday afternoon, he decided that it would not be stable enough, it would not hold up, and that a full repair was needed.”

Huge blow for a Bills team that believed Miller was the piece that would put them over the top in the AFC.

Miller Seemed To Be In Good Spirits:

When you’re making over $20 million per season not even a season-ending injury can damper your spirit. Miller seemed as upbeat at as ever. The former All-Pro also said, mentally he’s in a good space, and he’s confident he’ll come back better than ever.

That’s a huge for any player to feel like Miller does as they prepare to go through a long and rigorous rehab. Guys like former first-round pick Greg Rousseau and second-round picks AJ Epenesa and Boogie Bamsham will be expected to step up in Miller’s absence. Rousseau is the best pass rusher on the sways not named Von Miller and he knows he’ll be asked to apply pressure without having defensive coordinator Leslie Frazier having to bring extra guys to get to the quarterback.

“It’s tough when you lose a really good player like Von, you know, but we got a lot of guys in the room and we all just need to step up. We’re all ready for the opportunity to step up. It’s unfortunate, but I know I’ll be praying for Von and I’m wishing him a speedy recovery cause that’s our guy. We love Von, he’s a brother to us, so it’s sad to see him, see that he’s not going to be out there no more, but it’s like, we got to step up, there’s no time for us to feel sorry for ourselves or none of that.”

Miller’s Absence Will Be Felt In Playoffs:

In a conference that boasts QBs like Patrick Mahomes, Joe Burrow, Tua Tagovailoa and others, the absence of Miller will be felt come the postseason than the regular season. The last two playoff losses have come to the Chiefs and not being able to get to Mahomes was the main reason for the losses. That’s what the addition of Miller was suppose to tighten up.

The Bills defense still has plenty of talent, but the loss of Miller is gonna be tough to overcome against teams and quarterbacks like those mentioned. It’ll be up to head coach Sean McDermott and the aforementioned Frazier, two defensive masterminds to devise a plan to make up for the loss of Miller.