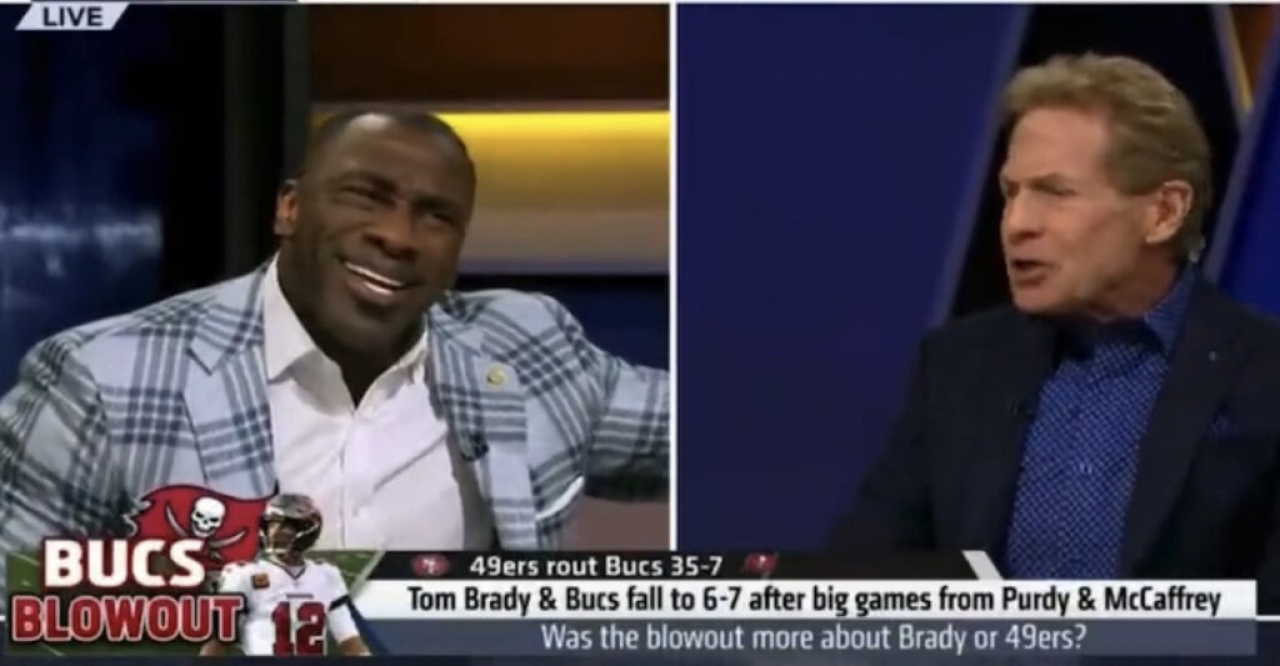 Things got real heated on the “Undisputed,” set Monday morning as co-host Shannon Sharpe and Skip Bayless almost engaged in a little fisticuffs on the FS1 set. During a segment about Tom Brady, Shannon mentioned that Brady hasn’t played well this season.

In response, Bayless a renowned Brady apologist  tried to say Brady has been and he even attempted to use his age as an excuse for his play.

Bayless raised his voice, saying this ….

Shannon wasn’t about to let Skip who never sniffed the gridiron belittle his illustrious Hall of Fame career. In fact, “Uncle Shay Shay,” removed his glasses and let Skip know how he felt.

“That’s what you do. Every time I call something into question, I get it …. I did what I did! You make it seem like I was a bum! I’m in the effin’ Hall of Fame. I got three Super Bowls!”

“You’re willing to take a shot at me, to say he’s better than me, because I say he’s playing bad this year?”

In typical Skip fashion, he tried to defuse the situation after getting Sharpe riled up, basically making it look as if Sharpe was being a bully, when that’s the farthest from the truth.

That was the second time in the last few months that the two co-hosts went at it pretty heavy on a topic. The previous time it was about Baker Mayfield and his putrid play. But with Skip if you ever talk down on Brady, the Dallas Cowboys, Oklahoma football or the San Antonio Spurs, he gets in his feelings.

When Skip was on ESPN’s First Take he got into a similar spat with former Seattle Seahawks legend Richard Sherman that turned ugly. It had a little bit of everything, but what most remembers is Sherman telling Skip he’s “better at life than him.”

Immediately following the heated interaction, Skip once again played victim saying this on his podcast, “The Skip Bayless Show.”

What’s funny is what he said Sherman did to him, he tried to do to Sharpe and it backfired.

Sharpe Was Correct And He Has No Reason To Envy Brady:

For Skip to think someone with Sharpe’s credentials is jealous of Brady shows his ineptitude. As he stated Sharpe is enshrined in Canton and also has been a huge part of three teams that hoisted the Lombardi Trophy. While he may not be recognized as the greatest tight end of all-time, like Brady is considered the GOAT of signal callers, Sharpe has some real accolades of his own.

And his assessment of Brady’s play was spot on, as the 45-year-old playing in his NFL record 23rd season has shown signs of being that old all season. Anyone who watches games can see it, but Skip is just too far gone on the Brady juice to say it, and the disconnect between he and anyone who doesn’t agree with him on TB12.