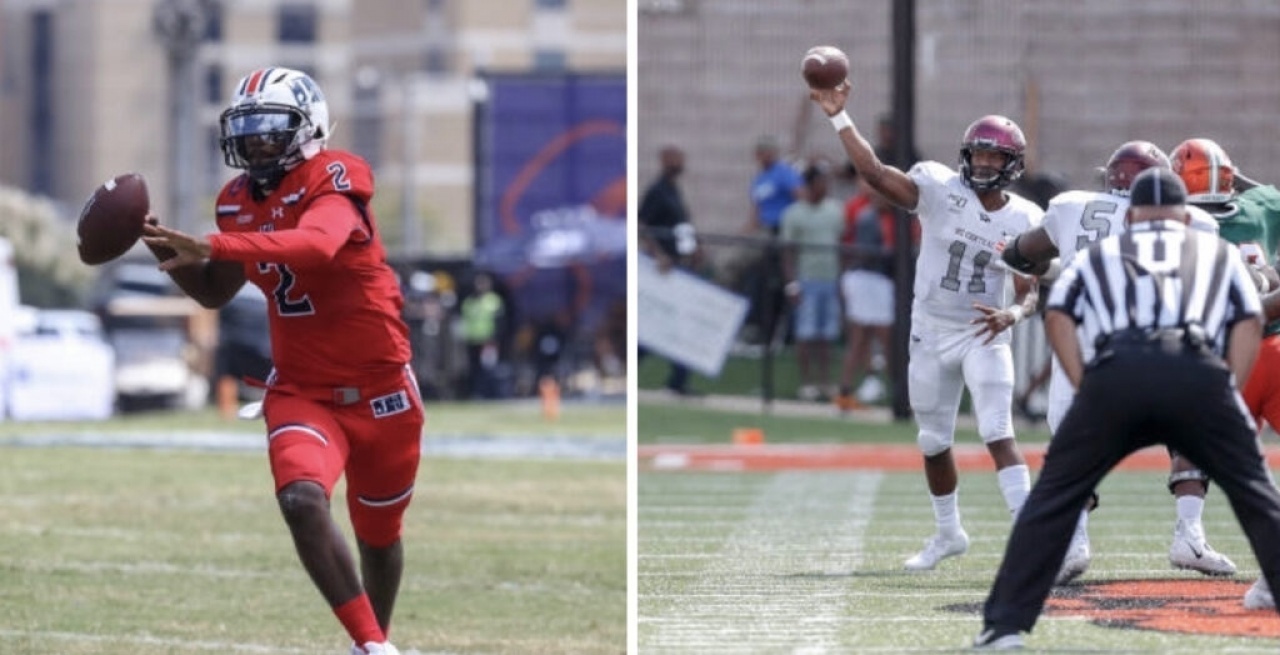 The 2022 version of the Black College Football national championship will feature the reigning SWAC and MEAC Offensive Players of the Year. Quarterback Shedeur Sanders who’ll be playing his final game in a Jackson State uniform will lead the undefeated Tigers into Atlanta looking to avenge last season’s 31-10 beatdown at the hands of the South Carolina State Bulldogs in this same game. Then Sanders will follow his dad, Coach Prime to Boulder to lead the Colorado Buffaloes.

On the other sideline is Davius Richard the dynamic dual-threat star for the upstart North Carolina Central Eagles. While Richard may not be as known or talked about his game is good enough to be mentioned among the best signal callers in all of FCS.

In what is a matchup of contrasting styles, the Celebration Bowl couldn’t have asked for a better matchup at the game’s most important position. The two best QBs in all of HBCU football.

Sanders, a true sophomore has started every game in his JSU career, boasting a record of 23-2. In his two seasons the reigning Jerry Rice Award winner has passed for over 6,600 yards, 66 touchdowns and just 14 interceptions. He’s also completed 68 percent of his passes in his two seasons. The youngest of Coach Prime’s sons will be looking to closeout his two-year run at JSU with the only thing that’s evaded him, a Celebration Bowl championship.

During his two seasons in the SWAC, Sanders has demonstrated a swagger, bravado, toughness and grit that many didn’t know he had upon arrival. He’s been the focal point of opposing defenses weekly, and has consistently passed the test.

Following Coach Prime’s announcement that he’d be accepting the job at Colorado, effective immediately, but he would be still coach the Celebration Bowl. Many also wondered if Shedeur would be under center, and that answer came along with his dad’s. In his final weekly interview with JSU on-site reporter Rob Jay, Coach Prime confirmed a couple things about he and Shedeur as it pertains to the big game.

“Yes I will. And I’m happy. I would have it no other way. I wouldn’t allow anyone to tell me I couldn’t finish with my team. We’ve got to finish.”

That statement was followed with a yes, Shedeur is starting the game as well. Really no surprise there.

Davius Richard Will Present Some Challenges For A Good JSU Defense:

Richard was far and away the best player in the MEAC this past season. In guiding the Eagles to a 9-2 record, the Belle Grade, Florida native passed for nearly 2,500 yards, 24 touchdowns and ten interceptions. He also displayed that game changing dual threat ability by rushing for 691 yards and 13 more touchdowns.

If the Eagles are to have any shot at an upset they’ll need all of that and then some from Richard. He should have ample opportunities playing behind the best offensive line in all of HBCU football. One that’s anchored by NFL prospect and MEAC offensive lineman of the year Robert Mitchell.

In his final presser before heading to Atlanta, head coach Trei Oliver told reporters this.

“It’s all about us. Whoever we saw on film the last time they played Southern, that’s who we are preparing for. We are not going to reinvent the wheel and change who we are offensively and defensively. Whatever those guys have seen on film on us, that is what we are going to do Saturday.”

The game will also feature the SWAC and MEAC Defensive Players of the Year as well, with JSU linebacker Aubrey Miller Jr and NCCU cornerback Khalil Baker.