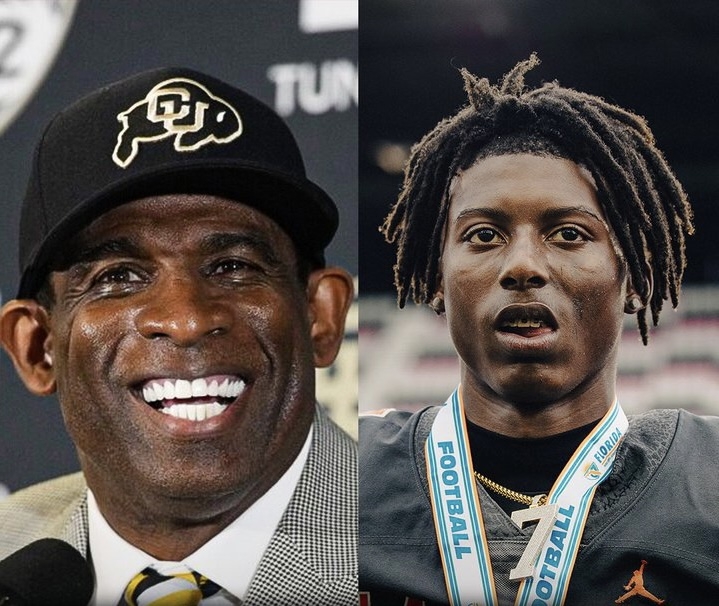 During Wednesday’s college football early signing period, five-star cornerback and No.2 recruit overall Cormani McClain was expected to sign with the Miami Hurricanes. That changed after a reported conversation McClain and his family had with new Colorado Buffaloes head coach Deion Sanders.

Following the interaction, McClain’s mom tweeted this to let everyone know her son wouldn’t putting his John Hancock on many national letter of intent on Wednesday.

Steve Wilfong of the 247Sports Signing Day Show had this to say about the turn of events.

“Colorado in touch with Cormani McClain already this morning. So the Buffaloes will try to make a move on the No.1 cornerback in the country. He’s has talked to Deion Sanders this morning.”

Not surprising when you consider Sanders flipped the nation’s top recruit in Travis Hunter last year from his alma mater, Florida State. So you know he’d love nothing more than to stick it took to sunshine state rival Miami in any capacity possible, while also upgrading his Colorado team along the way.

Does Sanders Envision A Hunter/McClain Cornerback Duo In Boulder?

McClain deciding to hold off on his signing with the Hurricanes, has some like Carl Reed of the 247Sports Signing Day Show believing the Hall of Fame cornerback is looking at having McClain and the aforementioned Hunter start opposite on the corners for his Buffaloes. That would immediately give them the best cornerback duo in the Pac-12.

“When I think about Cormani not signing with Miami today, I can’t help but to think — what would it look like in Boulder, Colorado,  with Cormani McClain at one corner and Travis Hunter on the other corner? You’re talking about nightmares for quarterbacks in the Pac-12, Year 1. Imagine Travis Hunter, one of the greatest athletes that I’ve ever seen on one side Cormani McClain. If coach Sanders can pull that out, that’s a legendary first Signing Day on the job.”

No one has quite the gift of gab, and that’s what swayed Hunter to Jackson State to play for him last December, after being fully committed to his dream school, Florida State for better than a year. The same could happen with the talented McClain who’s always been a heavy Miami lean and that’s also the school he’s always wanted to attend.

Sanders, and Colorado won’t be the only Power Five program vying for the services of McClain, a lockdown man-to-man who follows the best receiver on the opposing team. Programs like Alabama, Georgia, LSU, Ohio State and many others will be looking to sway the top defensive player in the 2023 class their way.

That was also the case with Hunter last year and somehow, someway the former Collins Hill High School star chose to attend an HBCU because of Coach Prime.

Will the Lakeland High School star do the same, by joining arguably the greatest cornerback to ever lace them up in cold and often snowy Boulder?

We shall see, and in the words of Terrell Owens, “get your popcorn ready.”