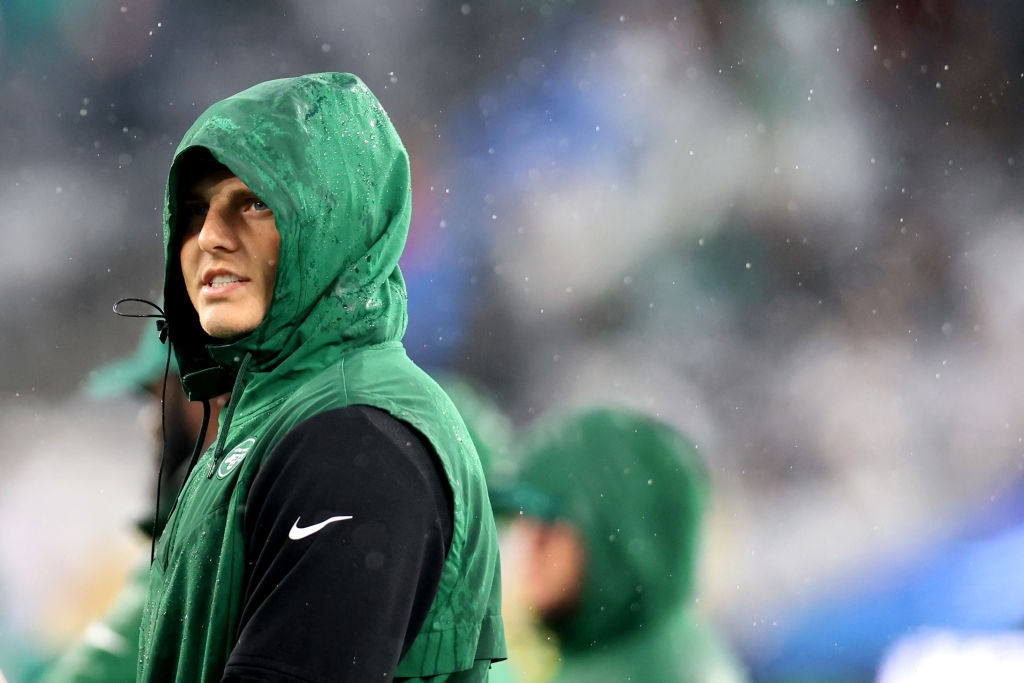 New York Jets quarterback Zach Wilson has struggled mightily since being drafted No.2 overall in the 2021 NFL Draft. He’s been benched, showed immaturity following losses and his play has just been nothing to ride home about. Things got so bad at one point this season, Jets players were wearing backup Mike White shirts as the team boarded their plane for a road game. Not exactly a lot of confidence or belief in Wilson the former No.2 overall pick.

But team brass has been adamant that he’s their quarterback and they’re gonna do whatever it takes to fix him. In fact, during Wednesday’s post practice media session head coach Robert Saleh talked at length about Wilson’s future with the Jets, and why he’ll be a healthy scratch for the team’s season finale against the division rival Dolphins.

“Go read a book, go do something, get away from this game, just reset,” Saleh said. I think the greatest gift you can give yourself as a human is to figure out what’s important to you. What do you value and how can you stick to those values day in and day out?

“This is the greatest gift you can give yourself, is to discover yourself. I think Zach needs to get away, read a book and figure that out.”

Saleh, still believes in his 23-year-old quarterback and hopes that him maturing will work out some of the kinks in his struggles.

“Zach has all the talent in the world, and we have all the confidence in the world in him,” Saleh said. It’s just, like I said, a reset. We’re going to grind with him. We are. Through hell or high water, we’re going to figure out how to get him where we know he can be.”

That’s easier said than done with Wilson, who’s gone 8-14 in 22 NFL starts. In those starts he’s passed for 4,022 yards, 15 touchdowns and 18 interceptions. In all honesty, Wilson just doesn’t look the part.

Jets Should Cut Their Losses: They Chose A Lemon

What Jets brass did at the 2021 NFL Combine and BYU pro day are exactly what you hope to avoid when scouting a prospective quarterback. They fell in love with a guy who made all these unbelievable throws in shorts and a t-shirt, with no defense attempting to thwart him.

Those type throws are not something you can hang your hat on and as of now that’s what Wilson does well. He also struggles to read defenses even with the reads dummied down to basically one read per route. At BYU he excelled against so-so competition, but there’s one game that in essence proved he shouldn’t have been chosen second overall. A late season loss to an overachieving and less talented Coastal Carolina team showed some real holes in Wilson’s game.

Going 19-30 for 241 yards, one touchdown and one interceptions isn’t exactly lighting it up against the best defense you faced your entire BYU career.

In drafting Wilson, the Jets passed on current Ohio State quarterback Justin Fields who was clearly the best QB in the 2021 NFL Draft. Fields had just led the Buckeyes to the CFP championship game, after torching Clemson for six touchdown passes. Against Alabama in the title game he wasn’t as dynamic, but he was also playing with broken ribs suffered against Clemson. Point being the level the level  of competition that Fields performed at a high level against in the Big Ten and CFP was nowhere near comparable to the lack of competition that Wilson faced.

Imagine Fields who doesn’t have much talent in Chicago, with the likes of running back Breece Hall, and wideouts Garrett WilsonCorey Davis, and Elijah Moore.

If Wilson is to ever get the job done with the Jets, it’s gonna take some real time. But in many outsiders view that ship has sailed and maybe they need to be looking at bringing in someone like Raiders quarterback Derek Carr or another proven free agent. They have a playoff defense and an offense a QB short of being a real playoff contender.