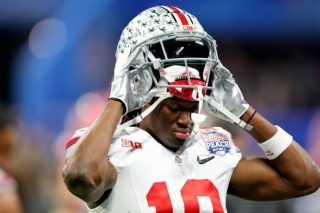 Marvin Harrison Jr., has quickly turned himself into the best wide receiver in all of college football.  Harrison, the son of Pro Football Hall of Famer, Marvin Harrison Sr, a true sophomore who’s coming off a 77 reception for 1,402 yards and 14 touchdowns season. So why, would he wanna transfer to USC? That’s the rumor being spread, and Harrison took it upon himself to silence all of type talk.

Ohio State insider Jeremy Birmingham at Rivals.com, revealed that during an interview with Harrison, the future first-round pick let it be known that he has no plans to leave Columbus for Tinseltown.

“I asked him when he was packing his stuff to transfer to USC,” Birmingham said on his podcast. “And he said, and I quote, “Where the bleep do they come up with this stuff?”

Birmingham then calmed all Buckeyes fans nerves with this statement.

“If you’re worried that Marvin Harrison Jr., is transferring to USC, please don’t,” he said.

Harrison Would Gain Nothing From Leaving Ohio State:

With star QB C.J. Stroud an expected top-five pick in this year’s draft expected to declare any day now, that leaves a void at QB in Columbus. Don’t fret, while the guys aiming to replace the supremely talented Stroud may not be as talented, they’re far from scrubs. In fact they’re four and five star recruits as well. And with head coach Ryan Day expected to take a step back from playcalling duties, you’ll probably see him focus more on what he became known for, which is developing quarterbacks.

That in itself is a big deal, considering the next Ohio State quarterback will have a plethora of talented pass catchers at his disposal, including the aforementioned Harrison and fellow 1000-yard receiver Emeka Egbuka. Plus two of the top receivers in the country join the fray in five star receivers Brandon Inniss and Carnell Tate.

The Buckeyes led defending champion Georgia 38-27 with less than 10 minutes remaining and then Harrison was concussed on a very questionable hit on an almost touchdown grab. The hit looked like targeting  but was overturned and Harrison was out.

That changed the game, and UGA would came back to win 42-41 as Ohio State missed a 51-yard field goal to win it. In the game Harrison was torching future first-round pick in cornerback Kelee Ringo to the tune of five receptions for 106 yards and two touchdowns.

Good to see Harrison isn’t leaving the scarlet and gray. Harrison’s situation at Ohio State is much different than 2021 Biletnikoff Award winner Jordan Addison leaving Pitt to come to USC, if you get my drift.

You can’t compare Pitt and Ohio State as it pertains to visibility and exposure on the gridiron.