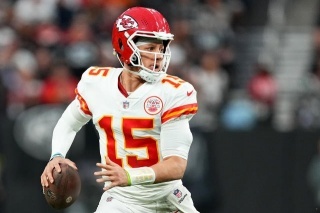 They say records are meant to be broken, and that’s exactly what Kansas City Chiefs superstar quarterback Patrick Mahomes seems to do every time he steps on the football field. On Saturday the former Texas Tech Red Raiders star broke the single season total yards record held by former New Orleans Saints quarterback Drew Brees. In 2011, Brees a future first-ballot Hall of Famer totaled 5,562 total yards. On Saturday in Las Vegas, which looked more like a Chiefs home game than a Raiders home game, Mahomes finished his season with 5,570 total yards, and while he got an extra game to do so, it’s still an amazing accomplishment.

In the Chiefs 31-13 win over the Raiders, Mahomes passed for 202 yards and one touchdown, bringing his season totals to 5,250

yards passing, 41 touchdowns and 12 interceptions. He also toted the mail for 358 yards and four touchdowns. Heck, he even caught his own pass and advanced it for six yards, bringing his season total to 5,570.

In Saturday’s win the Chiefs also wrapped up the No.1 seed in the AFC playoffs, and a 14-3 record overall, including 6-0 in the AFC West.

KC gets the lone bye in each conference, giving them a week to nurse some injuries and get off their feet a little so-to-speak.

Head coach Andy Reid, told reporters this about how the team will handle this time off in his postgame presser ….

“Just take a step back and get yourself where you feel stronger and healthier,” Reid said. You still gotta take care of business. Our guys understand that.”

Since he became the starter in 2018, Mahomes has dominated just about all of the NFL, but he’s completely owned the AFC West. Saturday’s win in Vegas, made him 27-3 against division opponents, but even more impressive is he’s never lost a road division game as the Chiefs starter, at 16-0. n those 30 games he’s thrown 66 touchdowns and just 16 interceptions.

He’s also 11-0 versus the Denver Broncos, joining former Colts star QB Andrew Luck who went 11-0 versus the Tennessee Titans, as the only players in the Super Bowl era with more than 10 wins and no losses against a single opponent.

During his postgame interview, Mahomes told reporters his mindset coming into division games.

“Something that was instilled with me right when I got here is we were gonna focus on the AFC West opponents,” he said. “We believe we have one of the best divisions if not the best division in football, so we know if we can handle business in the AFC West, it’s going to put us in position to be where we want to be at the end of the year.”

Is It Super Bowl Win Or Bust?

When you’ve had as much success as the Chiefs have, winning games becomes redundant. It’s all about how many times you can make it to Super Sunday and hoist that Vince Lombardi Trophy that matters. Since winning Super Bowl 54, it’s first one in 50 years as a franchise, KC has been blown out in another one and then blew a 21-3 halftime lead in the AFC championship game at home to lose and fail to advance to the Super Bowl.

Not making and winning it this season would be considered a failed season in KC.