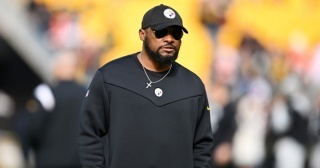 There was a time during the 2022 the Pittsburgh Steelers sat at 2-6, and for all intents and purposes it looked as if head coach Mike Tomlin’s record non-losing season streak would end at 15. Fast forward to Week 18, and the Steelers behind the leadership of the great Tomlin managed to finish 9-8, and only missed the playoffs by virtue of a head-to-head regular season loss to the Miami Dolphins who secured the final playoff spot.

In what was a trying season early, Tomlin navigated his young and for the most part pretty inexperienced Steelers team to seven wins in its final nine games. A true sign of a leader who’s players have bought all the way in.

Star running back Najee Harris who just secured his second 1000-yard rushing season in his second year as a pro, raved about the man who drafted him in the first round of the 2021 NFL Draft out of Alabama.

In his postgame presser, an elated Harris told reporters this ….

“That was just for Mike T, man,” Harris said after Sunday’s regular season and home finals win over the bitter division foe Browns.

Even more remarkable is the Steelers are the first team since the 1978 Chargers to rally from a 2-6 start to finish with a winning record.

Tomlin Adds To Record He Owns:

Players said Tomlin never mentioned the record, and for that it made them wanna keep it intact even more. Running the streak to 16 adds to the record Tomlin set last season, the streak is consecutive seasons to begin a head coaching career. Only former Dallas Cowboys head coach, 21 seasons, and New England Patriots head coach Bill Belichick, 19 seasons, have more seasons in a row without a losing one.

Star linebacker Terrell Edmunds, says no one lost faith that they could and would eventually turn thing around, another credit to Tomlin. He told reporters this in his postgame presser.

“I think everyone in the locker room would’ve believed it,” Edmunds said. “Just simply because we were all so bought-in. Everyone was together. Everyone was trying to stay together. That’s what we ended up doing. We can at least hang our hat on that. Even though we didn’t get to the promised land, to dig from 2-6 and come out with a winning season, man,  I think it’s special.

Tomlin Had To Migrate For First Time Without Ben Roethlisberger:

The 2022 season was the first time in Tomlin’s 16 season that he didn’t have future Hall of Famer, Ben Roethlisberger under center. The Steelers started former No.2 overall pick Mitch Trubisky to begin the season, and he was nothing special. Tomlin then inserted 2022 first-round pick Kenny Pickett, who has his typical rookie struggles but the team rallied behind Pickett to go 7-5 in his 12 starts. Pickett’s coming out party was last week’s big road win at division foe Baltimore, where the vitriol and disdain for one another is always high.

It was typical Tomlin, leading and guiding his team to unexpected wins amidst what looked like a lost season. But again Tomlin came up smelling like roses.

The appreciation should be just a loud as the disrespect this great coach faces yearly.