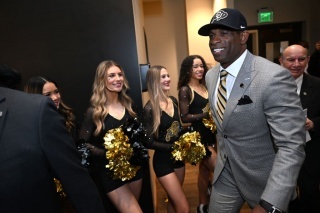 Deion Sanders arrival at Colorado is a big deal, and especially for a Pac-12 conference trying to put itself back in the limelight after some down years on the left coast. With the 2023 college football season to be Sanders first in FBS and at a Power Five, it behooves the conference to take advantage of a possible Week 1 all Pac-12 matchup featuring the Colorado Buffaloes and Arizona State Sun Devils. One with all the bells and whistles, meaning a visit from ESPN’s College Gameday as well.

On Tuesday it was reported that the Pac-12 and ESPN are in the works of having that game moved in order to focus all its attention on Coach Prime’s debut in Boulder.

Since the Pac-12 has yet to have its 2023 football schedules released, making it happen won’t be nearly as hard if schedules were already solidified within each program in the conference. In December, Senior associate commissioner for football operations, Merton Hanks told the San Jose Mercury-News that the conference was taking a look at some other things before finalizing schedules

“We hope to get it out relatively quickly,” Hanks told the paper. “There are some things we’re taking another look at, so we’ve asked the athletic directors for more time. It’s difficult because there are so many good teams.”

This is a direct result of Sanders taking the Colorado job on December 4th.

Sanders Showed Out When College Gameday Came To Jackson State

In October, College Gameday made the trek to Jackson, Mississippi as the Tigers hosted rival Southern. It was a spectacle down in Jackson, and just the second time the famous pregame show came to an HBCU. The Pac-12 is hoping to capitalize on some of that magic, and it’s a conference in dire need of something like that. Having only had two participants in nine years of the College Football Playoff and not have a team hoist a national champion since 2004, the “Conference of Champions,” have been reeling for awhile.

This is also a showcase for Sanders and his Buffaloes program who’ll be asked to help the carry the mantle of the conference with power USC and UCLA departing for the Big Ten in 2025.

What Is And Why Week Zero?

Week zero is the last week of August which traditionally didn’t have much going on in college football. A few games here and there but never really a game that could help shape the season. Those are usually reserved for Labor Day weekend, when college football traditionally makes it reappearance to the world. But after last year’s Notthwestern vs Nebraska Big Ten bash in Dublin, Ireland which drew a solid 4.4 million viewers, the Pac-12 is saying let’s give it a try.

It’s a smart move and the aforementioned Hanks sees an opportunity to get all eyes on his conference for a week, with Deion Sanders roaming one of the sidelines.

Coach Prime effect is officially in Boulder, and the Pac-12 needed it in the worst way.