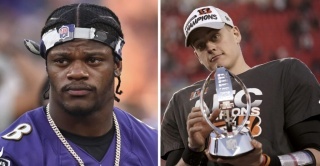 Unless Lamar Jackson Has Miraculous Recovery, Bengals Will Use Ravens As Warm Up To Potential Return To Super Sunday

Lamar Jackson and the Baltimore Ravens seem to be at an impasse, and while they may not be currently be in contract talks, Jackson absence following a knee injury last month, says a mouthful. With the team scheduled to face division rival Cincinnati in back-to-back weeks, but this time in the playoffs, any hope the Ravens have of pulling the upset rest solely on if Jackson can play. As of now that prognosis doesn’t look to good, as Jackson hasn’t practiced in 38 days since spraining his knee.

That leaves Ravens coaches to believe they may not have their best player in a game he’s gonna be needed in.

During Wednesday’s post practice presser, head coach John Harbaugh didn’t sound as if Jackson would practice tomorrow and Friday and be ready for Sunday’s tilt.

Harbaugh said Jackson is “working super hard” to play in the postseason.

“He wants to play,” Harbaugh said. There’s no doubt. That’s my feeling.”

In many ways Harbaugh didn’t have much to say about Jackson’s return, and it’s been pretty much been that way the last four weeks.

“I don’t really have an update right now to share with you.”

Harbaugh did say his superstar QB “has been in great spirits.”

“Hopefully it’s progressing to the point where he can get to practice sometime soon,” Harbaugh said. That’s really all we’re hoping for, for sure. When we have something to report on that we will, honestly, it’s just the truth of it.”

Sounds like a heavy dose of backup Tyler Huntley coming your way at Paul Brown Stadium on Sunday night.

Should Lamar Return If He Can?

This is where Jackson not having a contract beyond this season comes into play. With him being injured he’s gonna make sure he’s totally back to health before he takes another snap, and while he probably would do it even if he were under contract, he’s definitely gonna make sure he’s back to 100 percent before returning.

This is a byproduct of Jackson and the Ravens not coming to an agreement in the offseason, now their franchise player is protecting his health and well- being, which could cost the Ravens their season.

Without Lamar Uphill Climb To Beat Bengals Becomes Much Tougher:

The Bengals are the defending AFC champions who were 45 yards away from winning the Super Bowl. They’re led by their cool, calm and collected signal caller, Joe Burrow the 2020 No.1 overall pick, and all he’s done is lead them on a current eight-game winning streak, heading into the playoffs. Playing that well, and with the plethora of weapons like wide receivers Ja’Marr Chase, Tee Higgins and Tyler Boyd and running backs Joe Mixon and Samaje Perine at his disposal it’s hard to envision the Ravens going into Cincy and winning that game.

That becomes nearly impossible without Jackson who can flip the field on any play, and throws fear into any defense he faces.

In retrospect no Lamar could be the spark that the Bengals use to launch their run back to Super Sunday.