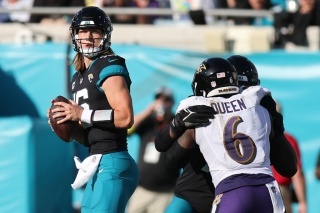 Trevor Lawrence’s rookie season was nothing to ride home about, as the 2021 No.1 overall pick who many predicted as can’t miss struggled under the stranglehold of then head coach Urban Meyer and his dictator ways. Fast forward to year two, and no more Meyer who was fired just 13 games into his first season following a slew of mishaps brought on by himself. The happiest person in that Jaguars locker room had to be Lawrence who’s rookie season was essentially taken from him with Meyer at the helm.

That turnaround got a quick boost when team owner hired Super Bowl-winning head coach Doug Pederson who immediately came in and treated his players like men, the total opposite of Meyer’s college-centric approach.

Behind the improved play of Lawrence the Jaguars went from dead in the AFC South to division champs and will now host the Los Angeles Chargers this weekend.

Pederson being a SB-winning coach knows how to handle these moments, and that’ll be key for the young Jags on Saturday night at AllTel Stadium.

On Wednesday, an elated but focused Pederson told reporters this in his Wednesday interview session.

“We’re just fortunate and blessed to have Trevor as our guy and how much he’s improved over the course of the season leads this football team. Really looking forward to watching him now on this stage. Last week was a step for him. Obviously, now this is another step in that direction.”

In his rookie season the former Clemson Tigers star passed for over 3,600 yards, but just 12 touchdowns and 17 interceptions. Not really bad numbers when you consider the lack of talent the Jaguars had last season. Jacksonville was very aggressive in free agency bringing in talent like wide receivers Christian Kirk and Zay Jones, plus talented tight end Evan Engram. That influx of talent played a huge role in Lawrence passing for over 4,200 yards, 25 touchdowns and just 8 interceptions this season.

In fact, he joins future Hall of Famer Drew Brees as the only QBs since 1950 to double his wins and passing touchdowns, while also cutting his interceptions in half. Never a bad thing to be mentioned in the same breath as Brees who’s recognized as one of the greatest passers to touch the gridiron.

It’s a credit to Lawrence and the aforementioned Pederson who’s recognized around the league as a QB guru. It’s a huge deal that Lawrence has someone like him to learn from daily.

This is just the Jags second playoff appearance since owner Shad Khan purchased the team 11 seasons ago. The team was one play away from the Super Bowl in 2017, losing to the Patriots, 24-20.

Lawrence Versus Justin Herbert Should Be Fun

This playoff game has two of the better

young QBs in the league, with Lawrence and Chargers star quarterback Justin Herbert. These two are hoping to be linked to the Patrick Mahomes’, Josh Allen’s and Joe Burrow’s of the league. This is the type of game that could go a long way in determining how they’ll be looked at going forward. They’re also two of the most physically imposing QBs as well, at about 6-foot-6 and 230 pounds each.

The aforementioned Pederson told reporters this about the two ….

Now both are trying to write their own story as it pertains to postseason football, where greats are made.