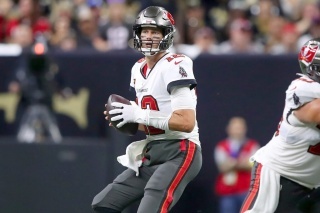 Tom Brady and the Tampa Bay Buccaneers are set to host the Dallas Cowboys on Monday night, in what is the final game of Super Wildcard Weekend. And while it’s a very winnable game for the 8-9 Buccaneers, ESPNs Stephen A.Smith believes the seven-time Super Bowl-winning quarterback will call it a career at season’s end, whenever that may be.

During a segment on ESPNs First Take, Smith had this to say about the former Michigan Wolverines star who’s in his 23rd NFL season.

“I don’t think they’re going to the Super Bowl this year, and I think he’s going to retire after this year.  I think that this year has been a very humbling experience for him because there are so many things out of his control.”

“To go through the year that he’s going through, it’s not an indictment against him. He’s had a lot of things going on both personally and professionally.”

Smith even took it a step farther calling this playoff run his final act in an illustrious soon-to-be first ballot Hall of Famer career.

“This is his swan song, this is the last time I think he’s going to retire after this season, and they’re not going to the Super Bowl, because o don’t believe they’re getting past San Francisco or Philadelphia.”

It’s been a trying year for Brady who retired for 44 days following the Buccaneers divisional playoff loss to the eventual Super Bowl champion Los Angeles Rams. Brady returned against the wishes of then wife model Gisele Bundchen. The return reportedly caught her by surprise, and things got so ugly that they ended their marriage of 13 years in October.

Brady Has Shown No Signs Of Hanging Up The Cleats

Stephen A’s prediction is definitely a hot take, and while he may be onto something, Brady has shown no signs that he’s gonna retire at season’s end. In fact, he’s been linked to other NFL, meaning a move away from the Bucs whom he joined as a free agent in 2020, could be in the cards.

Where could he go if he leaves Tampa and doesn’t retire?

One place many could see Brady possibly going is the Las Vegas Raiders, to rejoin Josh McDaniels his former offensive coordinator with the New England Patriots. The Raiders and longtime quarterback Derek Carr came to an agreement that the relationship had run its course a few weeks, and the team will look to trade him by February 15th, if not they’ll release the nine-year veteran.

Brady to Vegas works because they have the game’s best receiver in Davante Adams, and need to get him someone that he can trust to get him the football.

His 35 playoff wins are 19 more than Joe Montana’s 16, who’s second all-time. He has 21 more wins than Terry Bradshaw, Peyton Manning and John Elway who are tied for third with 14.

Point blank if there’s a passing record in the regular season or postseason, Brady probably owns it, and in Stephen A’s opinion this is where it ends, whenever it ends.