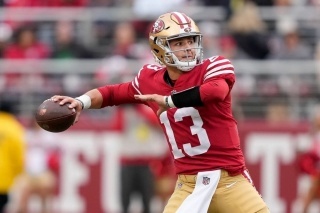 Brock Purdy aka “Mr. Irrelevant,” put on a show in the San Francisco 49ers 41–23  Wildcard Playoff win over the division rival Seattle Seahawks. The former Iowa State Cyclones star who was the final pick of the 2022 NFL Draft went 18-30 for 332 yards, three touchdowns and zero interceptions. Purdy used his sneaky athleticism to escape pressure numerous times in order to make some timely throws downfield to his targets, who did the rest.

“We have a lot of confidence in Brock Purdy.”

That type of comment goes a long way for any player, but especially one who was thrust into action suddenly, and is still expected to guide a team with a SB roster to their ultimate destination which is Super Sunday.

Will he be able to do it?

While that remains to be seen, one thing that he has behind him is the belief of every person wearing the garnet and gold.

“Brock Purdy did a really good job of staying alive. I don’t know why we couldn’t sack the guy. We chased him all over the place. He’s not noted for being the greatest scrambler but he looked like Fran Tarkenton out there today.”

Purdy Used All His Weapons On Saturday

In the game San Fran, amassed 505 total yards, including 324 passing and 181 on the ground. As a unit they moved the football up and down the field at will against a overmatched Seahawks defensive unit. It was the running and receiving of the dynamic Christian McCaffrey who went for 136 total yards on 17 offensive touches. His biggest  coming on the team’s second offensive possession where he gashed the Seahawks on the ground with a 66-yard scamper, that led to a Purdy QB sneak for a score.

There was also Deebo Samuel, the dynamic dual-threat receiver/ running back or “wideback,” who returned from an injury last week. All he did was go for 165 yards on nine touches including an electric 74-yard touchdown reception that was reminiscent of what Pro Football Hall of Famer did with regularity at old Candlestick Park.

Steadily rising wideout Brandon Aiyuk was solid as well, chipping in with three receptions for 73 yards.

None of it would’ve been possible without one of the best offensive lines in the NFL led by the game’s best left tackle in Trent Williams dominating upfront all game.

What’s Next Purdy And The Niners?

With Sunday’s win the Niners advance to next divisional round, where they’ll host the winner of Sunday’s wildcard matchup between the Vikings and Giants. No matter who the winner is, they’ll have make that trek to Santa Clara and Levi’s Stadium to face the hungry Niners.