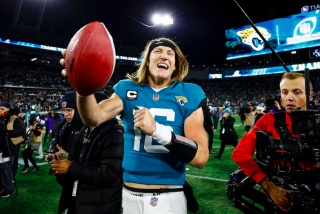 For the first thirty minutes on Saturday night down in Jacksonville, it looked like the Los Angeles Chargers would walk all over the Jacksonville Jaguars. In a game where the Chargers led 27-0 at one point, they somehow managed to lose 31-30 on a walkoff field goal.

The story of the night were the two 6-foot-6 signal callers, and while both had their moments, it was Lawrence’s resilience after a horrendous start that proved to be the deciding factor. Well that and some awful coaching and decision-making by Chargers head coach Brandon Staley, and his staff.

Lawrence began the game 5-18 for 35 yards and get this four interceptions. Yup that’s right, at one point the 2021 No.1 overall pick had five completions to his team, and four to the Chargers. But that didn’t stop him and the Jaguars from staging the third-largest postseason comeback in NFL history. Only Buffalo’s 1992 comeback from 35-3 to stun the Houston Oilers, and the Indianapolis Colts 38-10 comeback to shock the Chiefs in 2013 were bigger.

In the second half Lawrence passed for over 250 yards and those four touchdowns. His play exuded a grit and belief that seemed to resonate throughout the entire Jags team. Not to be for his first playoff game, and his teammates think the world of him.

In fact, in an on-filed interview immediately following the miraculous win, wideout Zay Jones told Cameron Wolfe of the NFL Network this about Lawrence.

“What a leader we have in Trevor.”

Trailing 27-7 at halftime, whatever head coach Doug Pederson said to his team definitely played a role in this most surprising outcome. Pederson is a Super Bowl-winning head coach, having led the Eagles to the franchise’s only SB win back in 2017-18. You have to believe he leaned on that experience and the fact they he was the Chiefs offensive coordinator when the Colts staged that 2013 playoff comeback.

As for Lawrence he showed why he’s long been considered a can’t miss prospect. To bounce from a four interception first half and lead your team to an improbable playoff in your first ever playoff game is straight out of a Hollywood movie. It’s just another step in the process of building a winner in a place where winning isn’t the norm. Prior to Pederson’s arrival this season the Jags were 4-29 the two previous seasons.

Pederson raved about his QB to Cameron Wolfe of the NFL Network as well.

“We love having Trevor. He’s our QB, and he never flinches.”

Jubilation On One Sideline, Heartache On The Other

As Jaguars players ran around and celebrated,  Chargers players could only stand in silence or leave on field in utter shock as somehow afte somehow allowing the Jags to snatch a victory from the jaws of defeat. That’s the type of victory that costs coaches jobs, and this could do in the aforementioned Staley who’s shown he can’t get this supremely talented past where they currently are.

With former Saints head coach Sean Payton floating around and interviewing for head coaching positions once again, Staley can’t feel safe at all.

Payton and Herbert together has a nice ring to it, while in Jacksonville the Pederson/Lawrence is just getting started.

The Jags are likely headed to KC, while the Chargers are left wondering what could’ve and should’ve been.