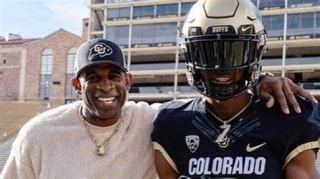 Colorado Buffaloes head coach Deion Sanders has hit the road running in Boulder. The Pro Football Hall of Famer currently has the 44th-ranked class in the 2023 rankings. But if he can add five-star cornerback Cormani McClain to the mix that number could change dramatically. McClain, the No.1 ranked defensive player in the 2023 recruiting class and No.3 player overall, is coveted by many, and following his secret visit to Colorado over the weekend many believe he’s headed to play for Coach Prime.

Omarion Miller, a 2023 four-star wide receiver signee believes it’s just a matter of time before McClain signs with the Buffaloes. Speaking from the Polynesian Bowl this past weekend, Miller told Rivals reporters this.

“The commits and the coaches were definitely texting me,” said Miller. I’ve never been before so I’m looking forward to my official but we re- scheduled it for the end of month.”

Miller said his future Colorado coaches and teammates are telling him things look good on the McClain to Boulder front.

Miller then told reporters he also believes that McClain is now “locked up” as a commit.

If so, it’d be a huge get by Coach Prime for the second consecutive recruiting cycle. During the 2022 cycle, while the head coach at Jackson State, Sanders shocked the college football world when he flipped the nation’s top recruit in cornerback Travis Hunter.

When the early signing period began in December the belief was McClain would sign with the Hurricanes. That changed the morning of December 21st when he and his family received a call from Sanders and the Buffaloes, and others. The change had McClain’s mom take to Twitter to announce that her son wouldn’t be signing during the early signing period, but at a later date.

That day was suppose to be January 15th, but that came and went on Sunday, while McClain was in Colorado.

The rangy, speedy, ball-hawking McClain has 57 offers, meaning just about everyone was hoping to land the game changing defensive back. When he does choose his destination, heading to Colorado would be a very smart move, being that Deion is widely considered as the best to ever play the position.

If Coach Prime is able to pull off the double whammy it’d be a huge development in the Pac-12 conference. In an era of passing the football just about 62 percent of the time, you’d have arguably the two best cover guys on one team. And in a conference with reigning Heisman winner in USC quarterback Caleb Williams, Washington signal caller Michael Penix Jr, Oregon’s Bo Nix and others it’d be a real jolt for the Buffaloes defense.

When it comes to Coach Prime we’ve learned to never count him out after last year’s Hunter heist.