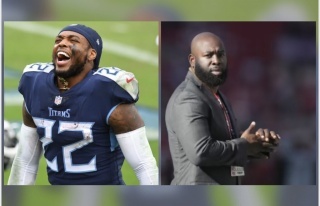 The Tennessee Titans looking for a change in leadership following a seven-game losing streak to end the season, hired San Francisco 49ers director of player personnel Ran Carthon as their new general manager. The move makes Carthon the eighth Black GM in the league, the most ever at any point in league history. The move also comes on the heels of the team firing former GM Jon Robinson in November for fielding a roster that in the opinion of team brass wasn’t good enough going forward.

On Wednesday, the team made the announcement in a statement released by the controlling owner Amy Adams-Strunk.

“We are excited to add Ran to our organization as our new general manager,” Adams-Strunk said. “He brings a variety of valuable experiences to our team — as a former player and a successful personnel executive for multiple teams. I was impressed with his natural leadership qualities and his ability to connect with people.

“With talent evaluation being critical to this role, the roster they have built in San Francisco stands out. He played an important role there constructing one of the league’s best teams.”

Carthon helped build the Niners you see today, with their vaunted defense and dominant run game. The team was built in the image that Carthon, head coach Kyle Shanahan and GM John Lynch saw fit, and it’s produced raving reviews.

Carthon Will Be Task With Adding More Talent To Titans Roster

Titans head coach Mike Vrabel is widely considered one of the best leaders of men in the league. And he showed it through the first ten games of the 2022 season, as he led a Titans team devoid of elite talent to a surprising 7-3 record and in first place in the AFC South. But injuries to key players like star running backs Derrick Henry. Plus some very questionable offseason moves made by the aforementioned Robinson, mainly trading star wideout A.J. Brown on draft night began to rear its ugly head. Quarterback Ryan Tannehill showed regression then was injured, and overall a once promising season went up in flames.

The team lost the final seven games of the  season, including a winner-take-all season finale against the more talented Jacksonville Jaguars for the AFC South division title. The loss effectively ending their postseason hopes.

Now Carthon will have to decide if Tannehill can still be the guy, do they go with second-year QB Malik Willis or sign someone else in free agency?

Both Carthon and Vrabel pride themselves on building a tough, disciplined and physical roster. If you look around the league you’d be hard-pressed to find two more physical and disciplined teams than the Niners and Titans. The glaring difference in the two was talent, and while the Niners have an abundance of it, the Titans are currently devoid of it in many areas. That’s where you’ll see Carthon focus on adding to this roster, because in the NFL you need talent to be successful.

The son of former Giants fullback Maurice Carthon, his presence and voice will be a welcomed sight for a Titans organization looking to stay in the thick of things in the talent-laiden AFC.

It’s a huge grab for the Titans and Vrabel who showed his displeasure with the team’s former GM Jon Robinson on draft night as he traded away the team’s most dynamic perimeter weapon. And from that point their relationship seem to go stale.