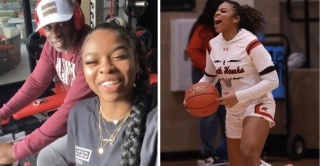 With all the movement that’s taken place with Deion Sanders leaving Jackson State for Colorado, lost in the shuffle a bit was what would happen with his youngest child, daughter Shelomi. Well we now have some clarity on that matter as the 5-foot-7 sweet shooting combo guard is set to join the Colorado Buffaloes women’s basketball team. Her transfer comes on the heels of her two brothers Shedeur and Shilo following dad to Boulder, and while an announcement Shilo joining the team, it’s only a matter as he’s also in Colorado with his family.

Coming from Jackson State to Colorado is a huge jump for Shelomi, who joined the JSU Tigers under head coach Tomekia Reed in this her freshman year. But when dad accepted the job at Colorado, Shelomi’s name was no longer on the team’s roster, causing speculation that she was following dad.

Lady Buffaloes head coach JR Payne announced that Sanders will redshirt this season, but could be practicing with the team as soon as next week, once medically cleared.

Payne also discussed how much of the work by Sanders will be done individually with the team firmly entrenched in their current season.

In a recent post practice presser, Payne had this to say.

“It’ll be lots of individual training,” Payne said. There’s not really time at this point in the season to get a lot of those type reps (in team settings).

“It’s just getting acclimated early. It’s such a huge physical transition to the level and amount of training that we’re doing in the weight room. And, they’ll get enough basketball with the group that they will understand expectations and how we operate, how we do things.”

Payne said they in reference to Sanders not being the only player joining the 14-3 and 5-1 in the Pac-12 Buffaloes this month. The program also added Mikayla Johnson a 2023 four-star recruit who’s an early enrollee.

How Will Shelomi Fit With Colorado?

The one thing Sanders does good right now is catch-and-shoot which is what she did well in high school. She’s a knockdown shooter who’s capable of catching fire at any time. While, she never really got a chance to display that at JSU, that’s her greatest strength as of now. With the way the team is playing right now, having her redshirt and learn the offensive and defensive scheme is vital for her development going forward. Next year when she finally sets foot on the hardwood, she’ll be asked to do more than just shoot the basketball, they’ll be some playmaking duties for others that come with her combo guard position.

Transfer To Boulder Was Inevitable

When Coach Prime made the move to Boulder, along with his sons, no one truly believed they Shelomi was staying put down in Jackson. She’s her dad’s baby girl and if you’ve ever seen any of the YouTube videos of Coach Prime and his children in his office at JSU, they were all very protective of her.

The big question was would Colorado be accepting of her, after not much Division I Power Five interest out of high school. The belief was being at JSU was the perfect fit for her skillset, but if you can shoot that travels to any level of basketball. Now she’ll look to get better at making others better and creating easy opportunities for her teammates when her time comes to play next season.

We’re pretty sure she’s excited for the opportunity, but no one is happier than her Hall of Fame dad is to have her on campus with him in Boulder.