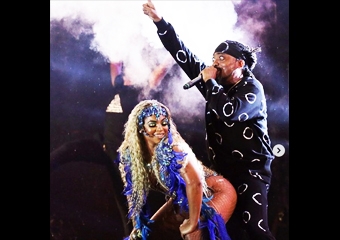 Ashanti is very booked and busy, making an appearance this week in Trinidad and Tobago. She recently collaborated with Machel Montano on their single "De Road," and joined the singer onstage for a lively, grinding performance. Ashanti uploaded snapshots of her time there on Instagram, sharing her excitement with fans. HoodCelebrity of KSR records was also a performer at the massive performance this weekemd. After this performance and beautiful getaway, Ashanti will prepare to return to the road on her tour with former Murder Inc. labelmate Ja Rule. The two performed together for six dates in February and will finish off their tour in April with an additional five shows in California, Connecticut, Georgia, Canada, and Belgium.