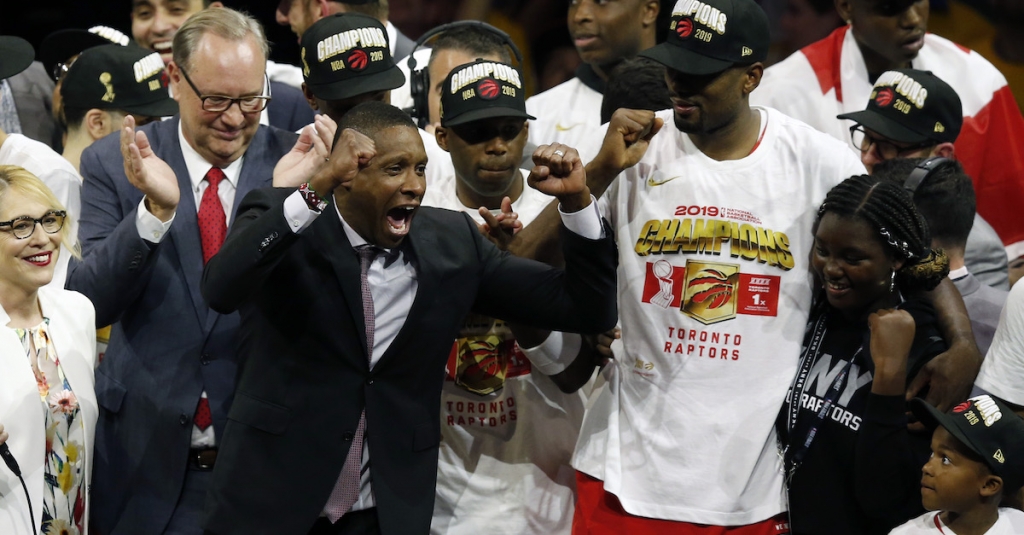 When the Raptors shockingly defeated the Warriors in Game 6 of the NBA Finals at Oracle Arena, Toronto erupted over their first NBA title.


Players celebrated on the court, and their team President, Masai Ujiri, walked down to celebrate with the team, and that’s when things got ugly.

Cop punched and pushed Raptors GM Masai Ujiri after the game more to be found out tomorrow morning pic.twitter.com/dyiJ05UXqM

Ujiri, who had his credentials in his hand, was then stopped and harassed by an Alameda County sheriff’s deputy as he tried to step onto the court, and a brief, but ugly, an altercation ensued. The deputy claimed Ujiri didn’t have his credentials, which is why he stopped the Raptors’ executive.

After cooler heads prevailed, Ujiri celebrated the team’s win and the news began to circulate about the incident. Reports began circulating that Masai was to be questioned by the sheriff’s office, while others spoke to his innocence.

The attorney for the deputy even claimed that his client has “a serious jaw injury” after Ujiri allegedly pushed and struck him in the face.

“The officer is off work, disabled and wants to go back to work,” said his attorney, David Mastagni, who also mentioned that his client suffered a concussion in the altercation.

Well after the investigation, and numerous interviews with fans around the incident, its become clear that Ujiri did, in fact, have his NBA identification and did identify himself as the Raptors President.

A typical case of a Black man being identified as a threat by white police without them knowing anything about him.

Witnesses say the cop was the aggressor and he's basically lying.  Cops say otherwise and it's still up in the air whether or not the DA will charge Ujiri.

'[We wanted] to show that a crime did occur when people are saying that ... there was no strike to the face, when in fact there was," spokesperson Sgt. Ray Kelly said. "We've done it in a way that can still let the investigation take place without contaminating the witness pool."

Just embarrassing for the NBA and even more embarrassing for Toronto cops to try and pursue charges against Ujiri as if he was the problem, especially moments after he just accomplished a historic feat as a leader of a pro organization