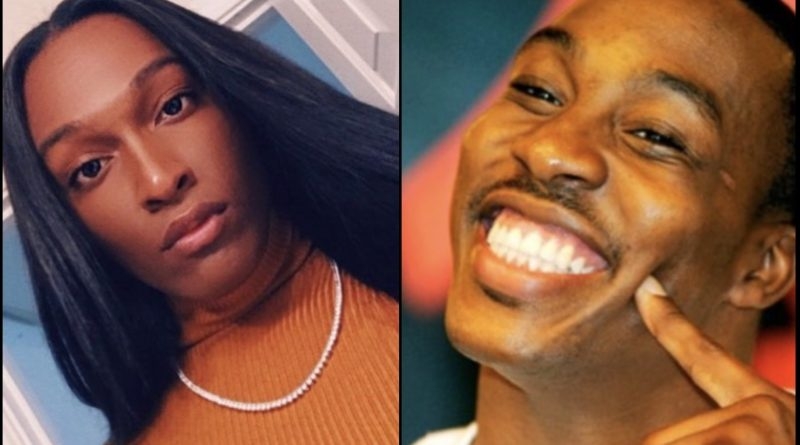 Since his early days as a stripper-hopping, basketball God, Dwight Howard's NBA career has fizzled out as he's jumped from team to team, developing a reputation of being a locker room cancer. It seems that the root of Howard's decline might be in his sexual lyfestyle and his efforts to keep it a secret from everyone.

I was afraid to speak but today my life was threatened after I was sexually harassed, threatened and manipulated, by someone I respected, my ex boyfriend NBA player Dwight Howard, and his camp also “”catfished”” by his disrespectful ass PASTOR pic.twitter.com/n1I1fwDcUw

Masin says he has contacted the police because Howard's pastor is threatening him after he refused to sign an NDA. Howard is obviously not trying to share his sexual preferences with the public, but Masin isn't shy about calling Howard his ex-"boyfriend"

Masin also claims Howard cheated on him at transgender sex parties -- going raw dog in sex mates -- which gives us insight into how big Howard's appetite is for transgenders.

So this is how that damn conversation went. Typical guy, LYING. I didn’t mind cheating but you’re “allegedly” at transgender SEX PARTIES sticking your penis in everyone raw? Okay Magic Johnson 2.0 with amnesia pic.twitter.com/xbshh9obWT

According to BSO, Masin has been caught in lies before, but rumors surrounding Howard's bisexuality have been floating around for some time now. Some even call it the worst kept secret in the NBA.

That is really serious and Masin Elije does state that he has gone to police about it, which is very important if true, it should be fully investigated especially if Howard claims it isn’t true. It should also be noted that Elije is the author of a book called “Industry Hoe” and has been caught in lies about celebrities before. It doesn’t mean he is lying now, but it is important that people know the whole story and these are just allegations at the moment.

So at this point, I am afraid for my life, I’m panicking, I’m having anxiety attacks and for a whole week I was bullied by Dwight’s team and Dwight Howard stood there and allowed his team to harass me, and I became a “faggot in a wig” when Dwight is a 6’11 BOTTOM pic.twitter.com/D3gKacGHHE

Masin also exposed some of Howard's other transgender trysts.

So this is the someone else, A transgender prostitute that he ALSO had a “understanding” with pic.twitter.com/RG0XdiILwH

Hey...To each his own, but if Howard is going to be chasing transgenders and fronting like he's straight to secure his basketball legacy, then threatening the dudes that he had relationships with after the fact, then it's only going to equal more trouble.

And with Masin about to put out her new book, "Industry Hoe," where she exposes athletes like were naked in a blizzard, the war Howard's camp has started with her came at a bad time for Dwight and the perfect time for Masin, who will ride this blockbuster news right to the bank.

I am super excited to announce that my book “INDUSTRY HOE” is now AVAILABLE for purchase! https://t.co/zpZSEOpPT7 pic.twitter.com/VLXWlMBUhk