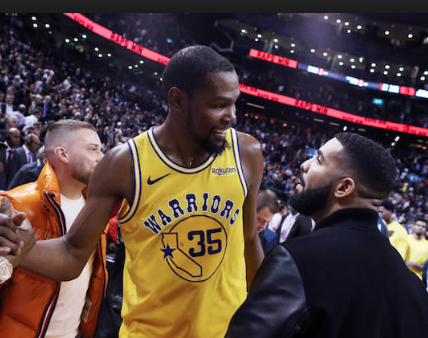 KD had a couple gifts for Drake before he left Toronto.

KD literally took his jersey off and gave it to Drake last night. Last night's NBA showdown between the defending champion Golden State Warriors and Eastern Conference-leading Toronto Raptors lived up to the hype and then some, as Kevin Durant and Kawhi Leonard both posted season-highs in an overtime thriller at Scotiabank Arena, formerly known as the Air Canada Centre.

Of course, Drake was in his usual court side seat for the highly anticipated matchup and was as active as ever, trolling Kevin Durant and co. throughout the night. For all his jawing, KD sent Drizzy home with a halftime titty twister and a game-worn jersey.

Durant finished with a season-high 51 points, including several jaw-dropping three-pointers to keep the Warriors in the game late, but it wasn't enough to avoid a 131-128 OT loss. He also added 11 rebounds and six assists on the night.