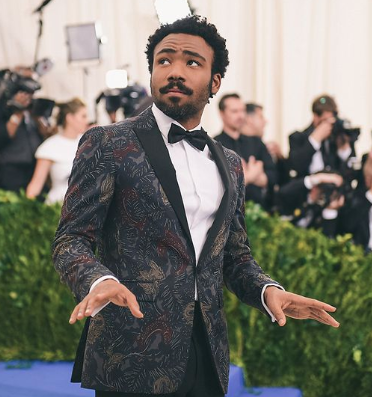 Being clean cut and well groomed is such a thing in the past, and slightly hairy chests and vibrant colored suits are the driving forces in today’s fashion, at least according to GQ Magazine.

Over the weekend, GQ released its top 50 best-dressed men in the world. Singer, actor, and director Donald Glover, aka Childish Gambino, landed at number one!

The creator of the hit show Atlanta and viral music video “This Is America” video climbed up 17 spots from last year to beat out actor Jeff Goldblum to claim GQ’s top spot.

GQ spoke highly of the Emmy Award-winner calling the 35-year-old a “new-wave renaissance man” and said, “his style is superbly ‘wavey’ too, providing all the Seventies-inspired vibes a modern man needs in his wardrobe right now.”

They also commented on Gambino’s open-chested attire: “While his array of cheekily unbuttoned silk shirts and soft, striped V-neck knits over the past year get honourable mention, our favourite facet of his personal style has to be his commitment to anything-but-black tuxedos – especially the regal, all-purple Gucci rig he wore to the Emmys in September. Our king.”