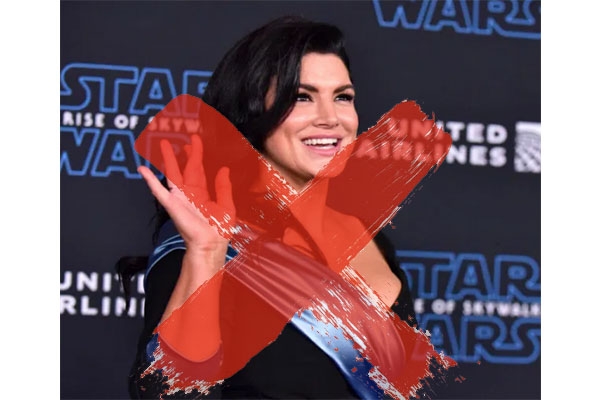 So here's the thing, people like Nick Cannon, this Gina broad, and people in the spotlight should be grateful for their journey.

They can not go into a movie theater and yell "Fire!" Just like religion, politics and other personal matters, unless they are getting paid to talk about it, should be kept as personal views.

Guess what....many of your favorite celebrities are even Republicans, but you wouldn't know it. The Jewish community is very sensitive about their past struggles with the Holocaust just like Black people are with slavery, so why go there????

Now you lose endorsements, gain followers because people are lost and looking for the next thing, but come on, let's have some sense.

"Gina Carano is not currently employed by Lucasfilms and there are no plans for her to be in the future. "Nevertheless, her social media posts denigrating people based on their cultural and religious identities are abhorrent and unacceptable."

George Lucas does not tolerate that sh*t and he shouldn't. Jewish screenwriter Lawrence Kasdan works with him and George's wife is even black, that's why we see so much different representation in Star Wars.

Lucasfilm says Gina Carano is no longer a part of “The Mandalorian” cast after many online called for her firing over a social media post that likened the experience of Jews during the Holocaust to the U.S. political climate.

Carano fell under heavy criticism after she posted:

Jews were beaten in the streets, not by Nazi soldiers but by their neighbors.... even by children.” “Because history is edited, most people today don’t realize that to get to the point where Nazi soldiers could easily round up thousands of Jews, the government first made their own neighbors hate them simply for being Jews.


How is that any different from hating someone for their political views? Some people just need to shut up.

The #FireGinaCarano hashtag immediately started to trend. Once again, just be grateful, chill and get your money.
Tags:  GINA CARRANO