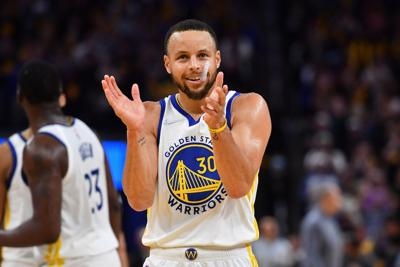 Steph Curry And The Warriors Really Embody The Team Concept

Stephen Curry and the Golden State Warriors are bracing to face the Boston Celtics in this year’s NBA Finals.It’ll be the Warriors sixth trip to the penultimate series in eight seasons, and let’s just say this probably wouldn’t be possible without a selfless superstar like Curry. The baby-faced assassin that has revolutionized the game is beloved by current and former teammates. Curry has always been a team first star and winning has always taken precedence over personal accolades for him.

That type of energy and leadership is recognized around the league and among most basketball analysts.

In a recent interview on 95.7 “The Game,” NBA analyst Ryan Russillo, talked about all things Curry …..

“Steph to me is the greatest star you could ever play with. “There’s other guys that would’ve started being a little more forceful going, ‘Hey why are we taking all these pics?’

“Imagine LeBron James sitting there with three lottery picks. How much he’d be like throwing 1,000 soft jabs at you, making sure the public knew he didn’t want any rookies. And that he would load them up and trade for DeAndre Jordan. Because that’s the way he does business … but he almost holds you hostage when you are ownership. He doesn’t ever want you to feel comfortable.”

Russillo could be referring to when James decided to return to Cleveland in 2014, and how he got No.1 overall pick Andrew Wiggins traded right away to acquire star forward Kevin Love.

Russillo Credits Warriors With Being A Team: Superstars

In a league that’s witnessed the buddy ball era take over, seeing the Warriors stick with their same drafted three core players (Curry, Thompson and Green) while adding pieces around that is a rare sight. And it’s one that’s had a ton of success. During the Steve Kerr era they haven’t lost a Western Conference playoff series going (18-0).

“I think team concept is a very important thing that seems uncool now. And I think the Warriors and Steph, they’re the opposite of that. This is a group that is selfless. Their personality — it’s a guy like Steph that it all orbits around, a guy that gets it that almost no other star in this generation gets it.”

“They’re just over the individual stuff in a way you don’t see in team sports, especially in the NBA, anymore.”

Curry’s Resume Is Only Missing A Finals MVP:

For Steph Curry this NBA Finals, will bring another opportunity to win a Finals MVP. While he’s done everything from MVPs to All-NBA teams, that’s the one thing his glowing resume is devoid of. Many believe he should’ve gotten in Dubs first title run in 2015, but voters decided to give it to teammate Andre Iguodala who guarded LeBron James all series and hit timely open shots when Curry and Thompson were doubled. The other two went to KD who was more than deserving, and Curry deferred to him from him committing to join the Dubs.

But if you know Curry he’s definitely more focused on winning a fourth ring than taking home a Finals MVP.