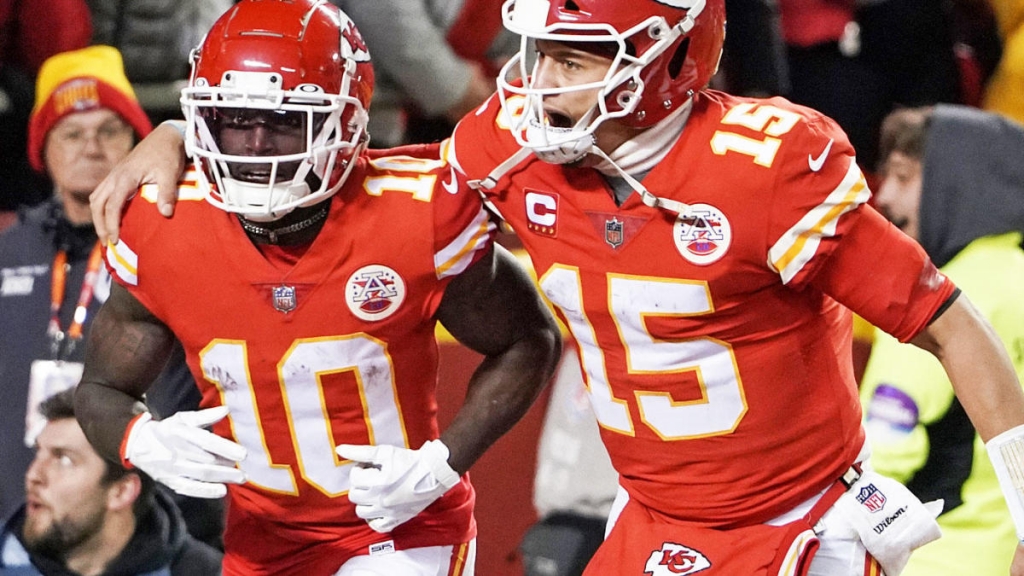 Is Tyreek Hill Poking The Bear With Comments About Patrick Mahomes

For the first four years of his career QB Patrick Mahomes always had two elite and reliable targets in tight end Travis Kelce and wide receiver Tyreek Hill. In this wild NFL offseason the latter was traded to the Miami Dolphins after he and the Chiefs couldn’t come to an agreement on a contract extension. While Hill with his 4.25 speed and dynamic playmaking will be missed, receivers are much more replaceable than signal callers. And, no we’re not saying it’ll be easy for the Chiefs to replace Hill, we’re just saying it’s much easier to do than replacing Mahomes.

Since the change the outspoken Hill has taken some subtle shots at the QB he’s caught 331 passes on 502 targets, for 4,638 yards and 42 touchdowns. That’s in 58 games together, meaning this connection was made often. But with Hill now in Miami, and making comments another Mahomes.  Those comments vary from Hill believing Mahomes will struggle without him, to saying his new QB Tua Tagovailoa is more accurate.

On an appearance on ESPN’s Get Up, NFL Analyst Jeremy Fowler mentioned he believes Hill is poking the bear in KC.

“Patrick Mahomes and Andy Reid were already pretty motivated and eager to show what they could do … and remind people hey, we won 12 games or more every year since Mahomes and Reid has been together. You’ve got JuJu Smith-Schuster Marquez Valdes-Scantling, all these players that they can spread the ball to.”

“Tyreek Hill’s comments recently were right on time. Mahomes was already in that mode. And he knows he’s the quarterback that helped Tyreek Hill just land a $120 million contract in Miami by the way they connected, so maybe he needed a little nudge to add to that fire.”

Hill signed a 4-year, $120 million deal with $72 million guaranteed upon being traded to the Dolphins.

Mahomes Has Been Excellent Minus Hill In The Past:

Although the largest sample size of Mahomes performing at a high level minus Hill was just four games back in the 2019 season, while Hill was on the injured list. During the stretch of games, Mahomes the gunslinger that he is was dynamite passing for 1,453 yards, eight touchdowns and zero interceptions. He also completed 108 of 152 pass attempts during the stretch and the Chiefs went (3-1) with wins over the Ravens, Raiders and Lions. Their lone came against a good Colts team, while Mahomes battled a nagging ankle injury.

So for Reek to believe Mahomes will struggle without him is a bit far fetched. In fact, the belief is Hill will struggle trying to get the ball in South Beach. While Tua is plenty talented, he doesn’t possess the arm strength, moxie or accuracy we’ve seen from Mahomes since he became the starter in 2018.  Hill’s best asset is his speed and catching the deep ball, but Tua has struggled throwing it deep thus far in his NFL career. Last year his top pass catcher rookie Jaylen Waddle caught over 100 passes and barely eclipsed 1,000 receiving yards.

Mahomes May Win Second MVP: Bieniemy Ready To Move On

Chiefs offensive coordinator Eric Bieniemy is a no nonsense type of coach and not too long ago he was adamant about moving on from Hill. While he did state they’ll miss him, he’s ready to develop the talent they still have and even added via free agency. Something tells me, Mahomes could have another MVP season, without the pressure of forcing the ball deep to Hill to keep him happy, he won’t make as many mistakes. Plus the offense will be much more diverse in it’s attack which should bode well for Mahomes and all parties involved.