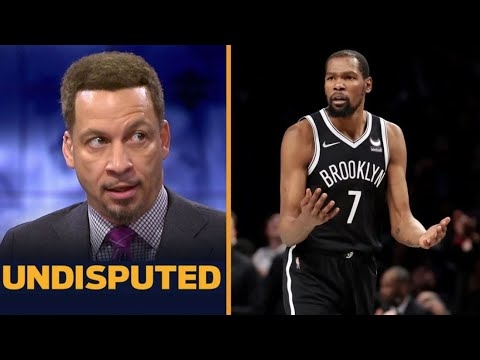 On Thursday, Brooklyn Nets star Kevin Durant formally requested a trade away from the Brooklyn Nets after three seasons. The superstar player cited Phoenix and Miami as destinations he’d prefer to be traded to. Unfortunately this has been KD’s “M.O,” throughout his career, when the going gets tough or something may not be to his liking he leaves. He did it in OKC, Golden State and now the BK.

During a segment on the “Odd Couple” podcast, FS1 personality Chris Broussard had some things to get off his chest as it pertains to KD. Broussard believes Durant struggles to stand on his own as a leader of his own team.

“If you look at the great players who won multiple championships or led dynasties, they were leaders, Larry Bird, Magic Johnson, Isiah Thomas, Michael Jordan, Steph Curry, Tim Duncan, they are leaders.

“They either lead vocally as well as by example or they lead by setting the tone for the culture. This is how we do it. That’s how Duncan and Steph did it. That’s not Kevin Durant.”

“I think we know why — with all his talent, all the great teammates he’s had — that’s why he hasn’t got it done outside of going to Steph’d team.”

While, Durant scores it effortlessly, he’s never been known for his leadership at any of his three NBA stops.

Has Durant Ever Shown Leadership?

Durant’s lack of leadership in OKC, along with head coach Scott Brooks is a huge reason why Russell Westbrook is the type player he is today. Never once did Durant, the team’s franchise player demand Russ play a different way to ensure more efficiency in late-game situations. That lack of discipline and reckless play was a huge reason the Thunder never won a championship.

KD has never really shown the leadership required to lead “HIS,” team to the finish line. During his time with the Warriors, Durant was the unquestioned best player on the team, but he never had to lead. That was done by Steph Curry, Draymond Green and to a lesser extent  Andre Iguodala. All Durant had to do was score and score some more. That led to two championships and three NBA Finals during his tenure in the Bay Area.

KD Vaults For Brooklyn: His Own Team

KD vaulted for BK after feeling like he was taken for granted with the Warriors. If we’re being honest, he never seemed fully comfortable coming to a team that had just won an NBA-record 73 games, but blew a 3-1 lead in the NBA Finals.

Now in Brooklyn, things have fallen apart with James Harden requesting and being traded midseason. Add in Kyrie Irving’s malcontent ways and his refusal to get vaccinated, severely hurting team chemistry and now Durant wants out. What’s funny is he wants to be traded to teams (Miami and Phoenix) that were the top seed in their conference this past season.

Things got tough and once again Kevin Durant is throwing in the towel looking for another fresh start.