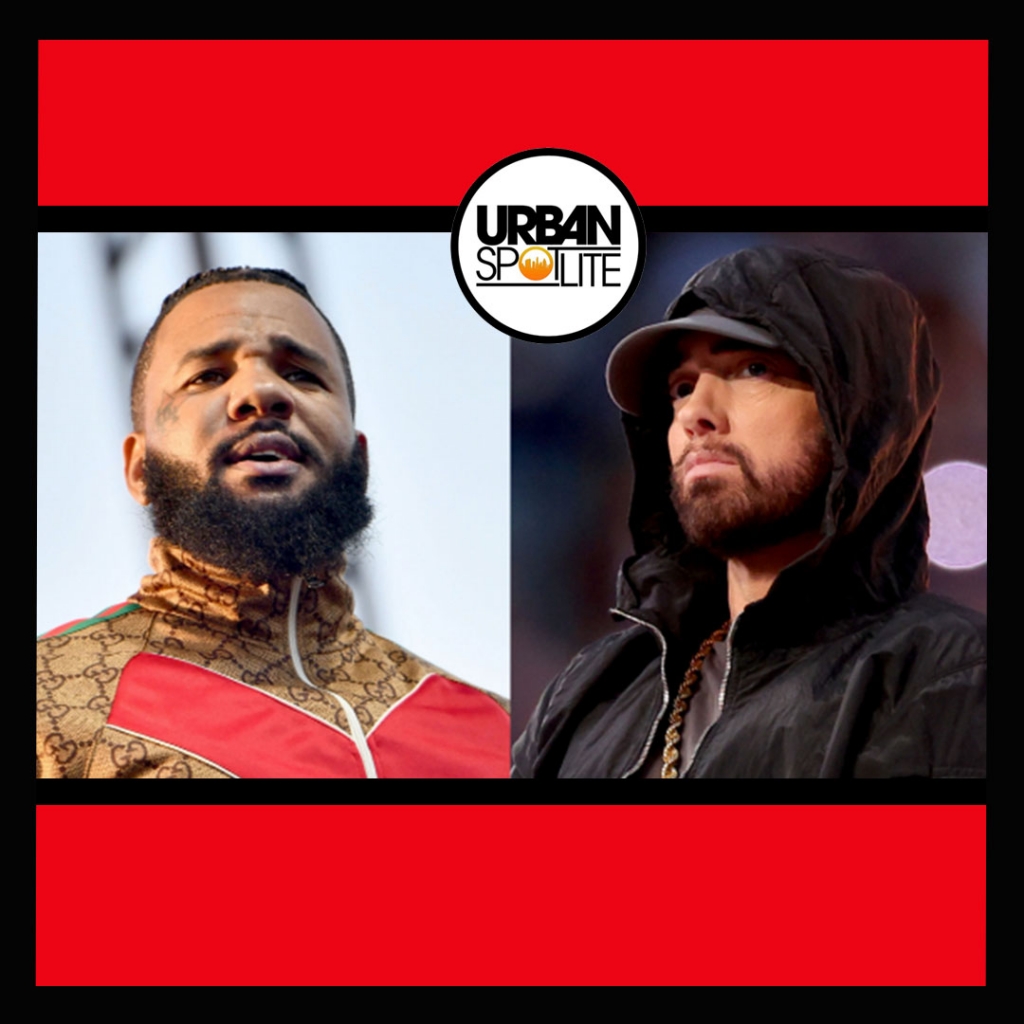 So the Game has been on a promo for his album for the last few months, starting with Drink Champs and has gone on to state he is not scared df the almighty Eminem. Eminem is a skilled wordsmith and is for a particular taste but never count him out. I promise you I've been hugging the internet awaiting Eminem's answer to the Game's record dissing Eminem because Eminem comes from battle culture. Lets take it a step at a time though, The Game has released a song called "The Black Slim Shady" aiming for Mr. Mathers and is about 10 minutes long (skit included.)
Some of the lyrics included are as follows:

All I got is my word, my d*ck and my MAC 10
One thing you can never have is my motherfuckin' Black... skin
This ain't no suit that I wore
This ain't a mansion, a hangin' plaque, this ain't no stupid award
So, oh, he goes platinum
And, oh, I'm on the 'Math with him
He got all the Blackest friends
He wants to be African, me
Left for dead on the Doctor's Advocate
Dre never executive-produced it, I just imagined it
Oh, here goes the magic tricks
Candy shops and the magic stick
DeAngelo Bailey got in shape to whoop your ass again
You depressed, you just maskin' it
You pop a Adderall, a Vicodin, and a Aspirin
But the math wasn't mathin' in
So pass me the torch 'cause the torture in my mind
With the voice that defied rhymes will force the blind eye
To see that I was in the white Rolls Royce with five .9's
When you was pretendin' to be the white Royce da 5'9"
I just crossed a fine line
Might just force the white guy to call D12 so he can be the pork they grind, swine
And the biggest rapper in Detroit, that award is Sean Don
So uncork the Chardonnay and stick my fork in white wine
I never heard you in a club, I never heard you in a bar
Eleven albums and ten never got played inside of my car
I'd rather listen to Snitch9ine like sixty-nine times
And participate in sixty-nines with sixty-nine nuns than listen to you
You're a Karen, call the cops, tell 'em it's a Black man on your block
With a Glock and he got it cocked
And the tattoos on his face is a star and a teardrop
He standin' on a teal drop and he says he can feel Pac in the air
Like Phil Collins, listen to him, he still wildin'
(Ah, Epstein chased me around Epstein island)
So silence, I'm—, I'm thinkin', uh, mm, yeah
Nothin' rhymes with orange!
So ficky-ficky Slim Shady, please, stand up
Shoot the fade with me, I'd love to put these hands up
I could .40 Glock you, unarmed
Drop the world on your head with one arm
Dear Slim, Hailie's with me and she's unharmed for now (Dad, I'm really scared)
These are the deepest secrets, I keep and I be on defence
'Cause G's ain't supposed to fold up
With all the facades I hold up inside of my mind, I froze up
I'm cold as COVID, Ebola, the Spanish flu, and Corona
The Zika virus, pneumonia is deep inside my persona
On each side of my shoulders is demons chasin' Jehovah
The renegade or the soldier, I really gave it to Hova (How it feel?)
Twenty-three years, still ain't penetratin' the culture
You are not, top five, in mine, B.I.G or Pac eyes
No André, no Nas, stop tellin' white lies
Sniff a white line, this the right time
I Suge Knight Vanilla Ice, I'm not Mr. Nice Guy

What are your thoughts? Is the Game too old to be coming for Eminem? Is his approach weak? Or is the song just weak overall? Let us know Spotlighters....
Tags:  THE GAME