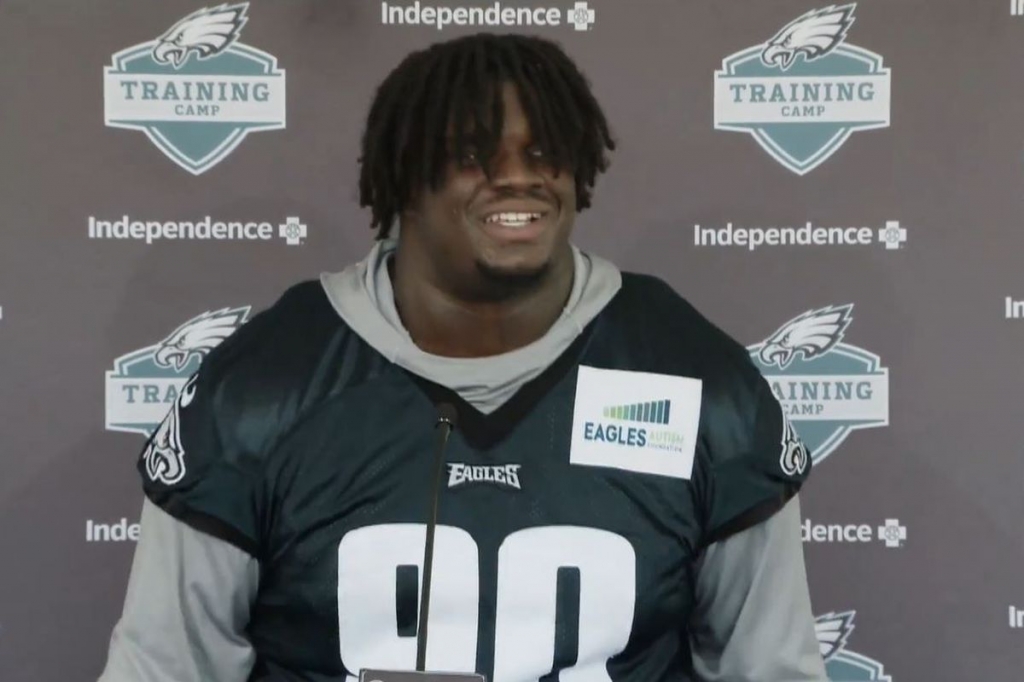 I Hate It Honestly, I Just Feel Like It Shows It’s Very One-Sided | Philadelphia Eagles Rookie Jordan Davis Upset With Viral Video Of Him Winning Rep Against Teammate

They call them the “dog days” of the summer. That’s when you make it through the first week of NFL training camp, and you can begin to see the finish line as it pertains to breaking camp and getting into your daily routine which will carry over into the season. Everyday there’s competition and with everyone being a pro they’ll be where everyone is beaten in an individual drill or even in team eleven-on-eleven. It happens and how you deal with it will go a long way in determining your fate as a player. For Eagles rookie defensive tackle Jordan Davis, a video of him winning a rep against a teammate in an individual drill went viral and to say he was upset would be an understatement.

Davis is a very mature 22-year-old who was one of the leaders that Georgia head coach Kirby Smart leaned on for leadership during the Bulldogs 2021 national championship season, it’s first in over 40 seasons. The Eagles were reportedly enamored with his physical traits, and with good reason, but it was his maturity in team interviews that won over the team’s brass. This week Davis displayed that maturity when a clip of him winning a rep against offensive lineman Cam

Jurgens went viral. In a post practice presser, Davis the reigning Outland Trophy (best interior lineman in CFB) had this to say about the clip.

“I hate it honestly. I just feel like it shows — it’s very one-sided. You see one rep, but you don’t see Cam just blocking me, and getting me at practice, and getting me at the other reps. I always say, ‘Looks can be deceiving, so one rep and it goes viral, whatever whoop-da-whoop.

“Cam is holding his own. He’s a very good player and it’s just good competition.”

During the rep, Davis literally drove Jurgens back about ten yards, showing his off his brute strength and power. But if anyone wasn’t impressed by it was him.

You don’t hear many players say they love the competition aspect of practice, let alone in training camp, but Davis isn’t your average rookie. The 6-foot-6 340 pound grown man wants to be the best and he feels competition can only help. You the old saying, “iron sharpens iron,” and Davis is here for all the sharpening he can get.

“I look forward to competition. We’re in this business to compete. To go against him, it makes me better and it makes him better. To be able to go against each other every day is an iron sharpens iron mentality. I always look at competition as getting me better.”

Davis Is The Future Anchor Of Eagles Defense:

The Eagles are led defensively by four-time All-Pro and six-time Pro Bowl Fletcher Cox, but he’s 32-years-old and although still very good, he’s on the downside of his career. Davis was drafted to be his protege and eventual replacement in the middle of the Eagles defensive front. Davis will be part of an eight-man rotation on the Eagles defensive line in 2022 that’s predicted to be the heart and soul of their team.

Davis will get plenty of in-game reps to show he can be the difference maker he was at UGA and can be at the NFL-level.