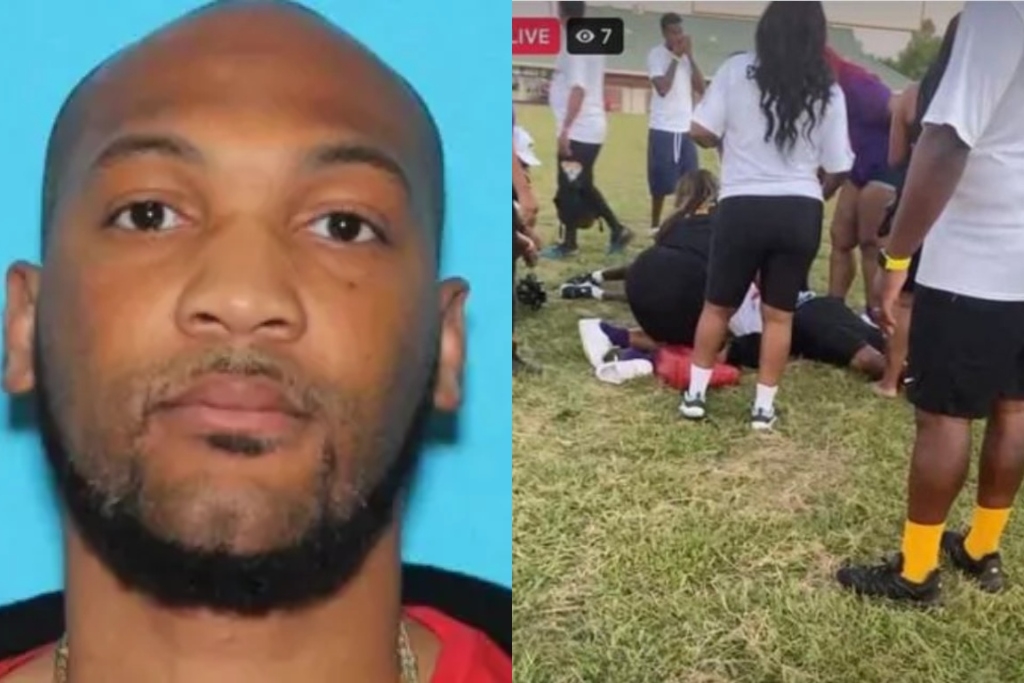 The world of youth sports has changed drastically over the years. Gone are the days of just playing for your neighborhood recreation or community center. Now you have all these elite travel teams that go in-and-out-of-state playing other programs. In many instances it’s not a bad thing as young players begin to get exposure and visibility at a young age. But then you have your money grabbing setups, that are designed to make a profit off of families, and if the kids get better they do and if they don’t so be it. Saturday night in Lancaster, Texas tempers boiled over between two youth (9U) coaching staffs and a coach, Michael Hickman was shot and killed on the field.

The suspect wanted in Hickman’s death is Yaqub Talib, who happens to be the brother of former NFL player, turned broadcast announcer Aqib Talib. In a video that has since gone viral on social media, it’s a lot of arguing about how a youth football scrimmage ended. Then you hear about four shots rang out, and Hickman is shot and killed.

The Lancaster Police Department released the following statement about the tragic and senseless incident.

“Upon arrival, officers were notified of a disagreement among coaching staffs and the officiating crew.

“During the disagreement the opposing coaching staffs were involved in a physical altercation and one of the individuals involved in the altercation discharged a firearm striking one adult male. The victim was transported to a local hospital for treatment where he was later pronounced dead.”

Unfortunately this type stuff has become a repetitive theme in youth sports. Parents and coaches berate referees who are making little to no money to call these games, albeit football or basketball. When games end in controversy it’s nothing to see parents and coaches run up to try and fight referees, or just straight attack them. In some instances the referees have even fought back to dented themselves, but in most situations they’re extremely outnumbered. It’s become a personal showcases for the coaches and not about the athletes.

As a former youth coach and current high school coach  I’ve seen it happen, never to the degree of a life being taken, but plenty of fisticuffs following or during games. And it’s setting a sad precedence amongst youth sports and showing our youth the exact opposite of what we should be teaching them in team sports and how it pertains to life.

Aqib Talib In Attendance At Game: Shaken By Incident Per Lawyer

A statement released by Talib’s lawyer via TMZ, read like this.

“Aqib was present when this unfortunate incident occurred and is very distraught and devastated over this terrible loss of life. He would like to convey his condolences to the family of the victim and to everyone who witnessed the unfortunate tragedy.”

The Talib brothers, with Yaqub being the oldest, grew up in both the Cleveland and Trenton, NJ areas. Places known for being tough inner-city places to come up in. In a 2015 interview with the Denver Post, Yaqub talked about their upbringing, and how it shaped them.

“Where we grew up, you fought quicker than normal. You didn’t want anybody to see a weakness. It was the culture we grew up in. I was the only one on my whole street who went to high school. We had kids (Aqib’s) age, he was in fifth or sixth grade, some of his friends had already stopped going to school. They’d just chill. When (Aqib) came home from school, he’d chill with them. Looking back on it, I think it created an us-against-the-world-attitude.”

That’s the same attitude he played his NFL career with, and it helped him become a SB champion, two-time All Pro and five-time Pro Bowler.

Outpouring Of Condolences For Hickman:

Hickman’s death hit early Sunday morning, and many sent their condolences. One of those was former NBA player, turned ESPN NBA analyst Kendrick Perkins who tweeted about the situation.

Perkins is one who witnessed the craziness of youth sports firsthand this summer. He even said it’s not about sports anymore. He talked about fights breaking out, teams using players above the correct age. Unfortunately this also happens in football as well, which causes a stir.