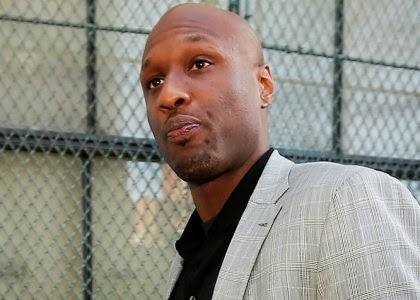 Former NBA player Lamar Odom is reveling in getting control of his Instagram account. Odom claims that following his split from his previous management they still had access to his social media accounts, and wouldn’t give him access. He also said they were still posting constantly, without his permission. Taking matters into his own hands Odom showed up at Instagram headquarters to regain access to his accounts, and was able to get it done.

Odom says he  hadn’t been able to post on his Instagram since July, and it was costing him big money.

He blasted his former management team for posting on his page. Odom even sent out a message denouncing any posts made during that timeframe.

“Anything you saw posted in my story or on my page was not me posting or commenting from this page.”

Odom decided to change management companies, and the previous one obviously wasn’t letting him go without a fight or trying to mess up his money.

Odom Made A Plea In Early July About Passwords Being Changed:

Odom reportedly changed management teams in mid-July, upon this change he asked for all passwords to his four social media accounts. When he was given the passwords they’d been changed, essentially locking him out of all his accounts. In a video posted to TMZ, the former  Rhode Island Rams star, had this to say.

“It’s kind of crazy I’m going through some things, I left my old management, of course of my decision.”

“I should be able to do what I want — a man 42-years-old, but my social media is not yours.  If I choose to leave that’s the decision I make. Your decision shouldn’t be to hijack my social media. It lets me know what cloth you come from.”

It’s safe to say Odom’s plea fell on death ears as he had to go to the social media giant’s headquarters to get the situation rectified. But there’s a lesson to learn from this, never put that much trust in management, they’re in it to get a nice check. And as  Odom found out when those checks stopped they went the petty and unprofessional route.

Between the four social media accounts (Instagram, Facebook, Twitter and Tik Tok, the former Los Angeles Lakers star boasts about (5.3 million) followers. And he also reportedly has 15 different advertising deals that use those platforms. Odom says every missed post could’ve cost him as much as $8,000.

Odom Been In The News For Other Stuff Lately:

Odom has been in the news quite a bit as of late, from his talking about past relationship with movie star Taraji P. Henson. Odom even stated if there was one relationship he wishes he could have back he mentioned the beautiful, talented Henson. Many thought he’d say his ex-wife Khloe Kardashian but he didn’t.

Instead he recently said Khloe could’ve hollered at him for her second child, instead of having it with ex-beau and fellow NBA player Tristan Thompson.

In a video posted by Page Six, Odom said this.

“She could’ve hollered at me for that.”

To add to the intrigue of “wanting that old thing back,” Odom is reportedly house-hunting in Khloe’s gated Los Angeles neighborhood. A coincidence?  I think not.

That’s why he needed them social media coins to get right.