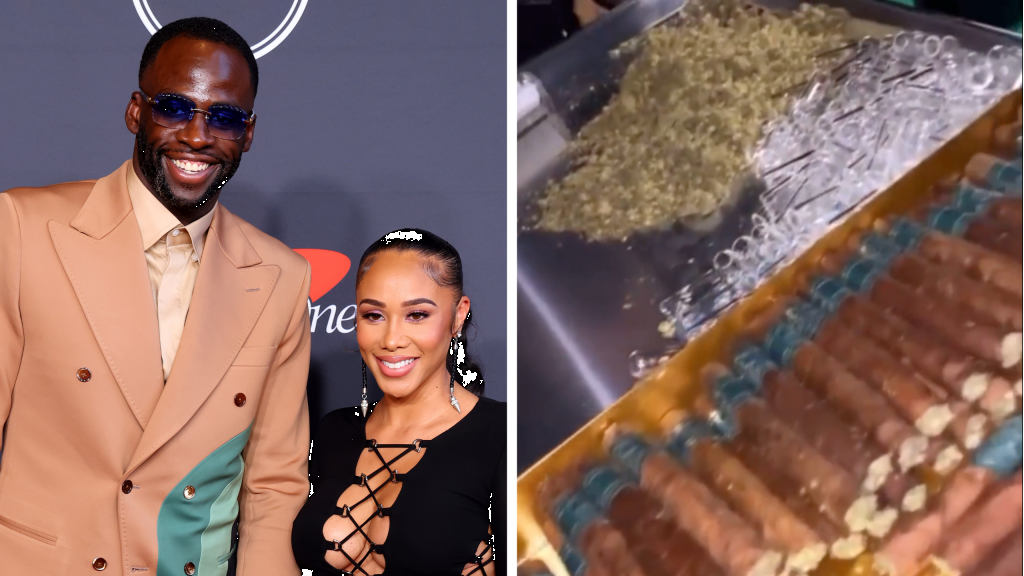 Over the weekend four-time NBA champion Draymond Green tied the knot with longtime girlfriend Hazel Renee. The two exchanged vows in front of their families, some of their closest friends, and in Green’s case some of his Golden State Warriors teammates. In attendance was reigning NBA Final MVP Stephen Curry, LeBron James, Jayson Tatum, and Patrick Beverley, to name a few. But the star-studded event and guest list isn’t what’s getting all the attention, it’s the cannabis party favors shared from his lavish reception.

While marijuana is still prohibited in the NBA, but with random testing going away since the bubble restart, players are definitely indulging in the recreational activity a tad bit more. And in California it’s perfectly legal to do so. In fact recreational marijuana use is now legal in 18 states and Canada.

But not everybody’s not feeling how the media portrayed the cannibis table.

NBA Analyst Wonders Why So Many Felt The Need To Show It?

NBA analyst Joe Shasky of 95.7 The Game, talked about Green doing this and showing it which he said he had no issue with. But it’s the way it became the thing to do, sort of taking precedence over two people sharing vows and becoming husband and wife.

“Now, it’s gotten to the point where for every team, every player, there are, like these fan accounts where, you, like see every step of this guy’s life. Yeah, it was California, correct? OK, it’s legal. So, are we taking photos of champagne bottles now, too, right? The media gotta get over this taboo.”

“I’m like, look, the weed is here to stay. I just see a lot of people aggregating, like, look what’s-going-on-here eye emojis.”

While Shasky is making some valid points to an extent, that’s almost impossible in today’s digital age, where social media is king. We live in an era where nothing is private especially something like a wedding reception with as many stars as there were in attendance. They want folks on their Instagram, Twitter and Tik Tok accounts to see them. And there’s no way weed being served as party favors wouldn’t show up all over social media, and we’re pretty sure Draymond Green and his new bride considered that before they decided to do that. So it is what it is, if Green didn’t see anything wrong with it being shown why should anyone else.

Green Could Be Playing Last Season(s) In Golden State:

While, Green the heart and soul of the Warriors since this magnificent run began in 2015 has two seasons left on his current deal. There’s a chance he could playing somewhere else in the near future, after he said he expects a max contract when that time comes. He’s looking for a four-year, $164 million extension and his leverage is the four NBA championships he’s helped bring to the “Bay Area.” But with his skills declining yearly it’ll be hard for the Warriors brass to agree to that with them way over the luxury tax and having to pay players like Andrew Wiggins, Jordan Poole and others.

Until then congrats to Green and his wife and here’s to happy puffing.