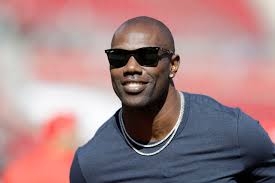 Last week Jackson State head coach and Pro Football Hall of Famer, Deion Sanders sounded off on the Hall of Fame becoming a free-for-all. Sanders went onto say, “The Hall of Fame ain’t the Hall of Fame no more.”  These comments came after this year’s inductees weren’t exactly game-changers, but more of the very good player variety. Coach Prime isn’t the only Canton enshrinee who thinks that, in fact per Sanders, “A lot of Hall of Famer think the same thing.”

One of those former players who’s enshrined in Canton is former NFL wide receiver Terrell Owens. The outspoken Owens piggybacked Sanders sentiments, by tweeting the following.

“Facts!!  I feel the SAME WAY. And half of them couldn’t even look at me or speak to me when I was there last weekend. I made it a point to let Dan Fouts know how and what I felt about him and his negative comments about me when I was nominated and didn’t make it in 2016 and 2017.”

Owens is speaking of him being a no-brainer first ballot induction but the committee not voting him in twice because of his actions on and off the field didn’t sit well with voters. Which is really not a requirement especially in Owens case, as he was never in trouble with the law or anything of that nature. His actions at times could be insufferable but not enough to warrant a two-year wait when he was an unquestioned first-ballot selection.

Following the committee’s decision to not let him in, Fouts went on 104.5 The Zone radio and blatantly said he believed the committee gave Owens a fair shot. In that regard Fouts maybe should’ve said nothing, because a fair shot and Owens would’ve been elected on the first try. Owens eventually got in on the third try, and then he didn’t show up for the ceremony, he chose to have it as his college, Tennessee-Chattanooga.

“I think his numbers are very worthy, but again on the other side of it, I think his actions on and off the field, on the sidelines, in the locker room, and the fact that he played for so many teams and was such a great player. That question that comes back to me is if he was such a great player, why did so many teams get rid of him? And I think we all know the answers.

“I think he did receive a fair evaluation of his career, both pros and cons. But obviously ripping the Hall of Fame process, what good is that going to do. I just don’t understand that. I don’t understand a lot of things he did in his career.”

Sounds like Fouts had his mind made up on Owens prior to the vote. And that’s why Owens is agreeing with Deion, they were game changers, not just great players and in TO’s case they made him wait not because his stars weren’t worthy. But because they didn’t like things he did or how many teams he played for. Didn’t know that was the criteria for getting into Canton.

Owens Can Talk The Talk: He Was Dominant

When you finish your career second all time with over 15,000 receiving yards, third all-time with (153) receiving touchdowns and eighth all-time in receptions with (1,078), you can boast a bit. For Owens and Sanders to both say the Hall of Fame process has weakened isn’t a stretch when you consider they’re not letting the “very good” in and not just the greats.

And if Sanders says he needs a different color jacket and he’d be one of the starting 11 on defense. Owens can say the same thing and he’d definitely be in the mix to start in the 11 on offense. Owens was that good, no matter if you didn’t like him, his numbers and accolades speak for themselves.