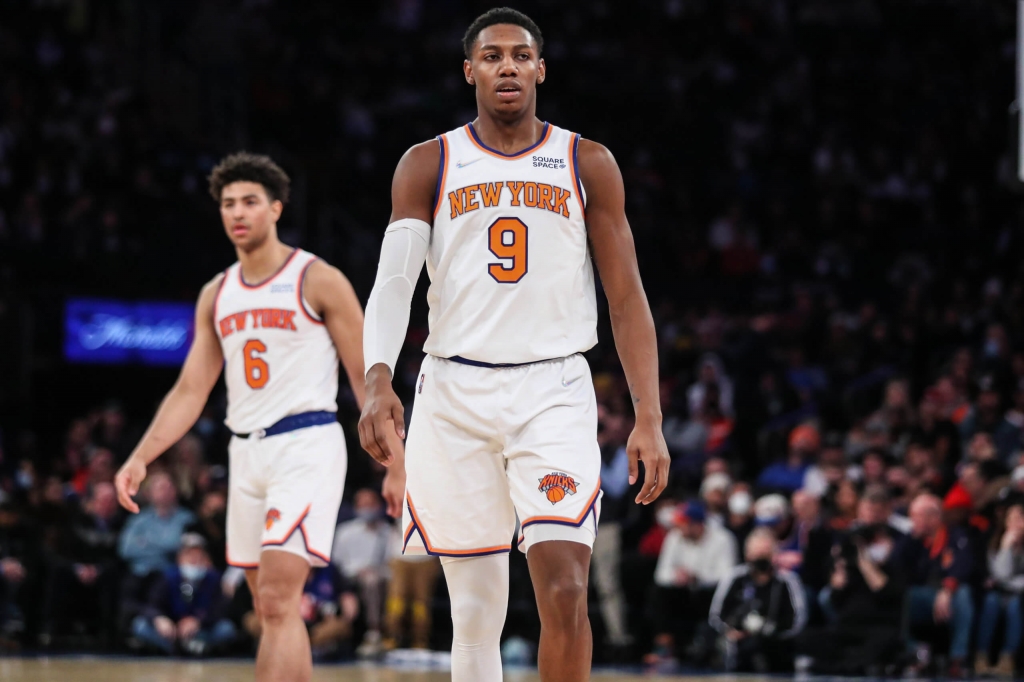 “Grimes Is A Better Defender And Three-Point Shooter Than Barrett” | Would Tom Thibodeau Prefer To Keep Quentin Grimes Over RJ Barrett? Insider Thinks So

The New York Knicks took a huge step back in 2021-22 finishing the season a disappointing (37-45) and failing to make the playoffs. This after going (41-31) in 2020-21 and clinching the fourth seed in the Eastern Conference Playoffs. A huge piece of both of those teams is forward RJ Barrett the 2019 No.3 overall pick out of Duke has seen gotten better each season. The smooth, rangy 6-foot-7 lefty averaged a career-best 20 points, 5.8 rebounds and 3.0 assists per game last season. Two areas the team would like to see him improve is his 40.8 percent field goal shooting, his 35.3 three-point percentage.

But overall Barrett is a very solid building block for the Knicks. And while many expect him to be in Orange and Blue for a long time, Marc Berman of the New York Post says he’s heard rumors that head coach Tom Thibodeau would prefer to trade Barrett instead of second-year guard Quentin Grimes, in a deal for Utah Jazz swingman Donovan Mitchell.

“There is belief around the league that Thibodeau would prefer to give up Barrett in a deal than Quentin Grimes, who is coming off a solid rookie year, and a summer league in which he looked quicker and more sculpted. Grimes is a better defender and three-point shooter than Barrett.”

While this is hearsay and we haven’t heard Thibs come out and say that, it’s still worth listening to. For one, Thibs prides himself on defense, that’s long been his claim to NBA fame as defensive strategist. Also he’s been a huge fan of Grimes since the pre-draft process.

Does Thibs Envision A Backcourt Of Jalen Brunson, Quentin Grimes And Donovan Mitchell?

The Knicks added former Dallas Mavericks guard Jalen Brunson via free agency this offseason, and Thibs reportedly envisions Grimes playing alongside Brunson and Donovan Mitchell was to be traded there. Grimes’ size, defense, range shooting and the ability to play without the ball, is why Thibs would want to see Grimes teamed with those two. With Brunson and Mitchell two ball-dominant players, Barrett wouldn’t be as good a fit because he’s also ball-dominant heavy.

Even with all that being said, Grimes still isn’t the player that Barrett is, in fact Barrett has the second-most points of any player in his draft class. Only Memphis Grizzlies star Ja Morant who went one pick before Barrett has more.

And Barrett is a very solid wing defender in his own right as well.

Could The Supposed Preference Be About Money?

This is the final year of Barrett’s rookie deal meaning, as of July 1st, the former Duke star is eligible for a five-year, $185 million max deal. Do the Knicks wanna pay him that or pay Grimes roughly $15 million for the next four seasons, as he’s under contract until 2025-26.

Another possible factor in the deal would be if the Jazz are confident Barrett would be willing to sign off on an extension. If he isn’t willing to play in Utah long term, any hopes of that deal would die right there.

Again this is all speculation at this point, but worth paying attention to, as Thibs has been known to take fit over pure talent. And in this situation he’d be doing just that, because based on talent alone Grimes is not in Barrett’s league.