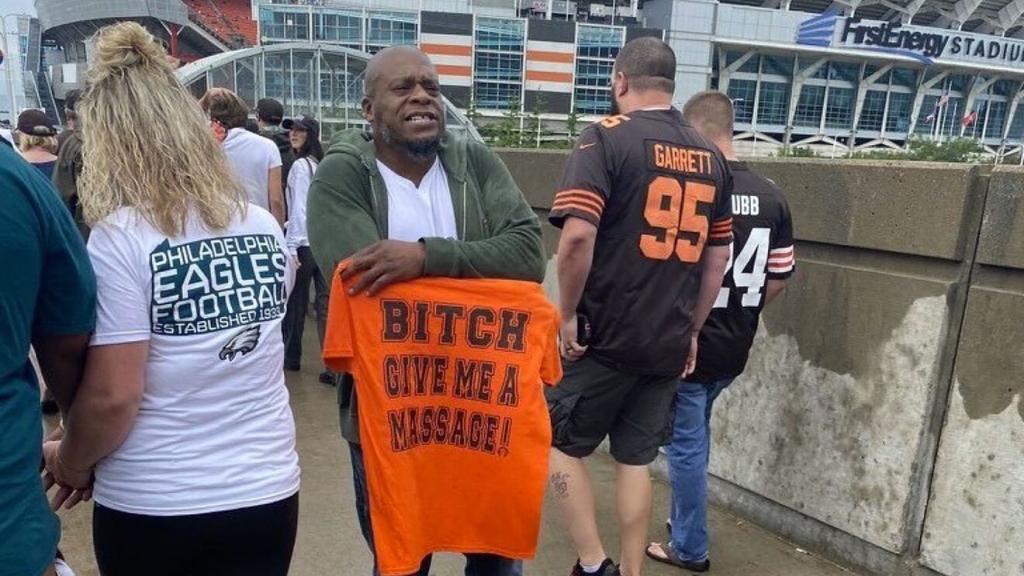 The Cleveland Browns traded for and signed quarterback Deshaun Watson to a fully-guaranteed deal of five-years, $230 million. Knowing good and well he was set to be suspended at some point this summer. After hearing both sides over a few days, arbitrator Sue Robinson came to the conclusion that Watson adhered to “non-violent sexual conduct.” She subsequently suspended the former Clemson Tigers signal caller to six games. The NFL and Commissioner Roger Goodell immediately appealed and an 11-game suspension, plus a $5 million fine was levied. While that decision seemed to go over well with most who aren’t Cleveland Browns fans, one Browns fans took the opportunity to make money, and he took it to a level of disrespect that shows absolutely no class and very little tact, if any.

While selling t-shirts at the Browns home preseason game this past weekend, the vendor was selling shirts which read ….

The shirt went viral and caused a stir in the social media world, with fans having a lot to say about this despicable attempt at a bad joke.

“Somebody ought to whoop his ass.”

“have the people of Cleveland lost it?”

The Browns will have to migrate for 11 weeks with either journeyman Jacoby Brissett or Josh Dobbs under center. But they do have a great running game with Nick Chubb and Kareem Hunt. And a strong, stout defense led by Myles Garrett and Denzel Ward.

Maybe this fan should be banned from selling his material outside the stadium if he’s gonna do things this insensitive.

After months of claiming his innocence, Watson decided to apologize to the alleged victims and anyone affected by the situation. In an interview with the Browns broadcast team prior to his first game in 586 days, Watson issued this apology.

“I want to truly say that I am truly sorry to all the women that I have in this situation. The decisions that I made in my life put me in this position, I would like to have back, but I want to continue to move forward and grow and learn and show that I am a true person for f character.”

“Deshaun has committed to doing the hard work on himself that is necessary for his return to the NFL.

Now Watson must go away from the Browns until October 10th when he’s eligible to participate in limited team activities. He’s eligible to return to the field on Nov 14th to begin practicing nealrly three-weeks before he’s eligible to play in a game on December 4th at his former team the Houston Texans.