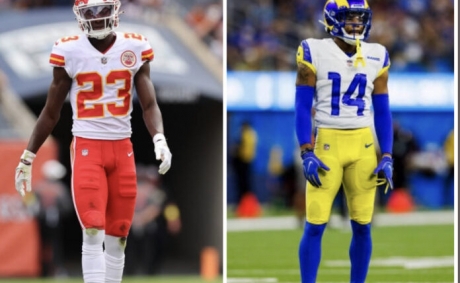 HBCU DBs Making A Name For Themselves | DeCobie Durant And Joshua Williams Are Locks To Make Rams And Chiefs Rosters, And Get Significant Playing Time

The 2022 NFL Draft saw four HBCU players drafted, that four more than we saw taken in 2021 and three more than we saw in 2020. Of the four Los Angeles Rams cornerback DeCobie Durant seems to be the one with the highest ceiling and who could see the most playing time this season as a rookie. The smooth, ballhawking corner has been very good in training camp and it’s caught the eyes of the fellow corner Jalen Ramsey, head coach Sean McVay and GM Les “F Them Picks” Snead.

In late July all raved about Durant, the 142nd overall pick. Praised his effort and swagger. With Ramsey, arguably the league’s best corner saying this ….

“He’s a competitor. He’s sneaky, sneaky, super athletic. He’s very smart. He wants to soak up a lot of knowledge.”

McVay talked about Durant jumping off the screen in the spring, and how it’s carried over to training camp.

“He made some plays even in the spring that stood out where you can see he’s a great competitor, even when you watch his film the way he played against Clemson. Similar to what I was mentioning about DK the other day. McVay said of Durant’s playmaking in camp.

GM Les Snead who infamously said “F Those Picks,” a prelude to all the picks the Rams have given up to acquire win-now talent, is happy to have hit on a draft pick.

“South Carolina State, a very respected program. A lot of players come out of there and make it to the league, and they do play a lot of power five schools here or there. You go to a combine or pro day, and you check some boxes there.”

Durant has been a surprise to an extent but the Rams knew he could play, but not handle the nuances of playing slot and boundary corner. He’s handled it and the team’s brass loves it. Even as the young defensive backs struggled a bit in a 24-20 loss to the Cowboys, McVay was quick to point out Durant’s play deserved an applause.

“I like the way that our young DBs continue to play. I thought Durant had another strong performance.”

Durant is currently in a tight battle to be Ramsey’s backup at right cornerback. He’ll dabble in the slot as well.

Durant Isn’t The Only HBCU Player Showing Well In Camp:

Chiefs cornerback Joshua Williams was the first HBCU player drafted in the 2022 NFL Draft, and his play has earned him the backup spot to starter L’Jarius Sneed at right cornerback as well. Sneed has taken Williams under his wing and it’s paying dividends for the rangy and inquisitive cornerback by way of Division II Fayetteville State. Sneed even said he’s learning from Williams as well. During a post practice presser last week, Sneed had this to say.

Williams appreciated the gesture and had this to say about Sneed, who’s known for his physical style of play.

“First off it’s a blessing for LJ to say that, because I look up to LJ. That’s somebody that’s a vet, that I really do try to model myself after and take little things after.”