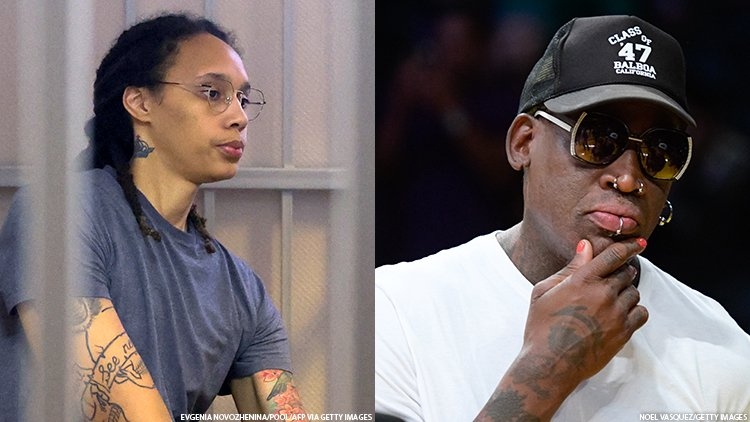 The Brittney Griner detainee situation in Russia has now hit nearly seven months. The WNBA star and two-time Olympic gold medalist has been detained in Russia for trying to smuggle illegal narcotics into the country. She has since been convicted and sentenced to nine years in a penal colony or Russian jail. Griner, who pleaded guilty, had her lawyers argue that the cannibis was to help treat injuries and reduce pain. But to no avail, the Russian court wasn’t trying to hear it.

The outcry has been heard from both WNBA and NBA players alike. With the women wearing “Free BG,” shirts during warmups. But that hasn’t changed her fate as of yet.

Over the weekend at a sneaker convention in Washington D.C., Basketball Hall of Famer, and five-time NBA champion, Dennis Rodman told NBC News that he has received permission to go to Russia.

“I got permission to go to Russia to help that girl. I’m trying to go this week. Rodman also mentioned that he knows Russian President Vladimir Putin “too well.”

Whatever that means, but what’s crazy if it’s anyone outside of the government who could probably help with her release it’s probably “The Worm.”

Rodman Has Been De Facto Diplomat Before: Can He Help?

Rodman is no stranger to intervening in the world of politics. Who can forget his highly-publicized run with North Korea and their leader Kim Jong Un. Beginning in 2013 Rodman’s impact on relations between North Korea and the United States was talked about far and wide. While Rodman told reporters he didn’t want to be called a diplomat.

His actions and the he way intervened in the North Korea and U.S. relations says different. Rodman even lobbied for then President Barack Obama to reach out to the North Korean leader, saying Kim Jong-Un wanted Obama to call him.

In an interview with ABC’s George Stephanopoulos on “This Week” Rodman said this ….

While that never happened, former President Donald Trump, took it a step further. Rodman touted Trump as a great negotiator and boasted about his involvement in Trump and Kim Jong-Un shaking hands and meeting to talk in Singapore. The meeting was called the biggest and most surprising diplomatic breakthrough maybe ever. Rodman who was in attendance for the historic meetup, told CNN’s Chris Cuomo this ….

Now he’s set to try and work his magic on Russian President Vladimir Putin whom he says he knows “too well.” In a 2014 interview with Fox Business, Rodman referred to the Russian leader as “cool.”

“No element of this trial changes our judgment and Brittney Griner is being wrongfully detained and should be released immediately. This is why we’ve put forward a number of weeks ago what we consider to be a serious, substantial proposal an effort to seek her release, to seek the release of Paul Whelan as well.”

“We are in communication with the Russians on this matter, and we encourage them to pursue this constructively.”

Can Rodman help? That remains to be seen, but give his track record, it’s worth a try, I guess.