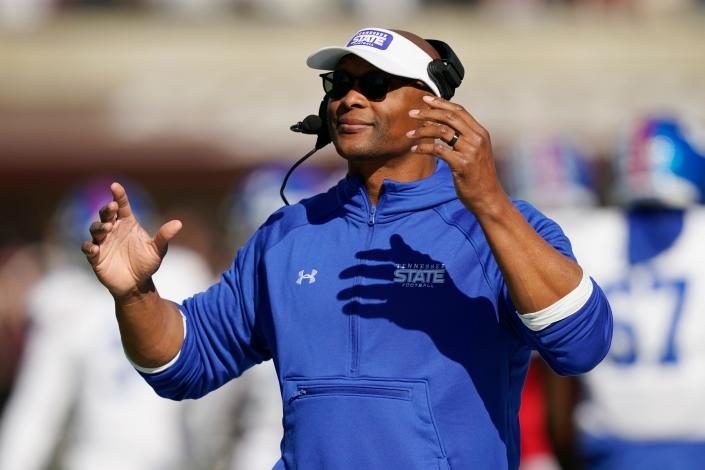 Tennessee State head coach and former NFL star Eddie George is laying down the gauntlet. His son, Eriq George is a 6-foot-2 260 edge rusher who plays at Montgomery Ball Academy in Nashville. He’s already received offers from Eastern Kentucky, Marshall and UT-Martin, with other schools showing interest. Where he attends school is his choice but his former NFL running back dad says he ain’t attending Michigan, George’s alma mater’s archrival or Jackson State with Deion Sanders at the helm, and making moves weekly. In many ways George and Tennessee State are the Tigers rival, having played 28 times since 1990. While TSU holds a (17-11) lead in the series, Coach Prime and the Tigers rolled them (38-16) last season in the Southern Heritage Classic.

In an interview with The Tennesseean, George let it be known that Eriq will not be heading to Mississippi or Michigan if it’s to play for the Tigers or Wolverines.

“He can’t go to Jackson State. He’s not going there or that team up north (Michigan, the rival school of Eddie George’s alma mater, Ohio State). But I tell him to see all that’s out there and ultimately trust your intuition, trust your gut.”

George Says It’s Eriq’s Deal With Where He Goes:

While, George is hopeful Erie chooses to play for him at Tennessee State, as Sanders two sons Shedeur and Shilo have done with him at Jackson State he knows it’s a process, and doesn’t wanna ruin the moment for him.

“This is his deal, his process, his career. He knows what I’m doing (at TSU); he’s around me everyday and he knows how he’s going to get coached (if he chooses TSU). I tell him to go see what’s out there, go where your heart desires.”

But what if his heart desires to play for Coach Prime at JSU? Would you be okay with it? As much as it would probably sting, I think George is mature enough to know either place his son would be in good hands. But first Sanders would have to offer Eriq. As for Eriq, he’ll have a front row seat to the action on September as what could be the final Southern Heritage Classic is scheduled to happen at the Liberty Bowl. This after a trying few months where Sanders and Jackson State pulled out of the game, citing it did nothing for them financially.

Sanders Helped Convince George To Take TSU Job: Both Are In It For Right Reasons

While landing five-star recruits at HBCU programs is rare, although Sanders landed the nation’s top player in Travis Hunter during the 2022 recruiting cycle. In actuality Coach Prime and Coach George are the five-star recruits that Black College Football craved. We’re talking to former All-Pro players in the NFL, and in Sanders we’re talking a Hall of Famer  although George deserves much more recognition for Canton, (that’s for another day).

They bring immediate visibility, exposure and notoriety to HBCU football. Seeing them roam the sidelines is a big deal, and shows that HBCU football not only has voices but faces that the student-athlete can resonate with.