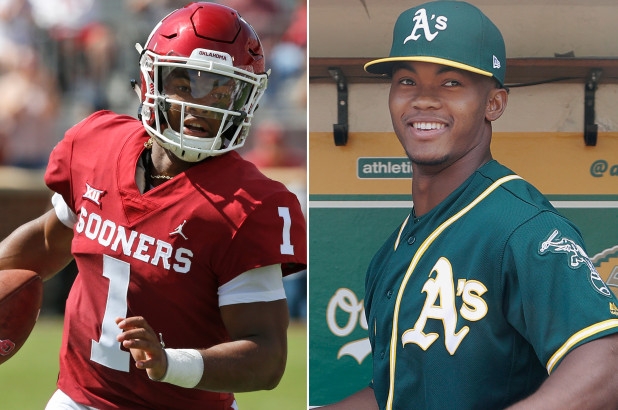 After two-sport phenom Kyler Murray wrapped up his Heisman Trophy-winning season with a loss in the College Football Playoffs, most fans assumed that he would finally put down the pigskin and commit to a life of baseball.

The former Oklahoma Sooners QB declared for the NFL Draft this week, leaving the door open for him to pursue a career as an NFL quarterback, despite signing a $4.6 million minor league deal with Oakland before the college football season started.

Quite a ride for @TheKylerMurray:

June 15 - Signs with A's, announces he will return to OU to play football

The A’s allowed him to return to the University of Oklahoma, where he shattered Baker Mayfield’s records and improved his stock as a potential NFL quarterback. Even at 5-foot-9, Murray seems to have the scouts hyped and  projecting him as a first-round pick.

Murray has decided to use his potential NFL Draft status as leverage towards renegotiating his deal with MLB’s Oakland  A’s to include more up front money. Reports say, Murray’s team is commanding a contract in the $15 million range.

Whatever the price,  if the A’s don’t comply, Murray now has the option of playing pro football.

Murray’s making ensuring that he capitalizes on the millions of dollars he made for Oklahoma and the future millions the Oakland A’s organization will make off of his name. His five minutes are not up yet,  so he might as well double down on it.