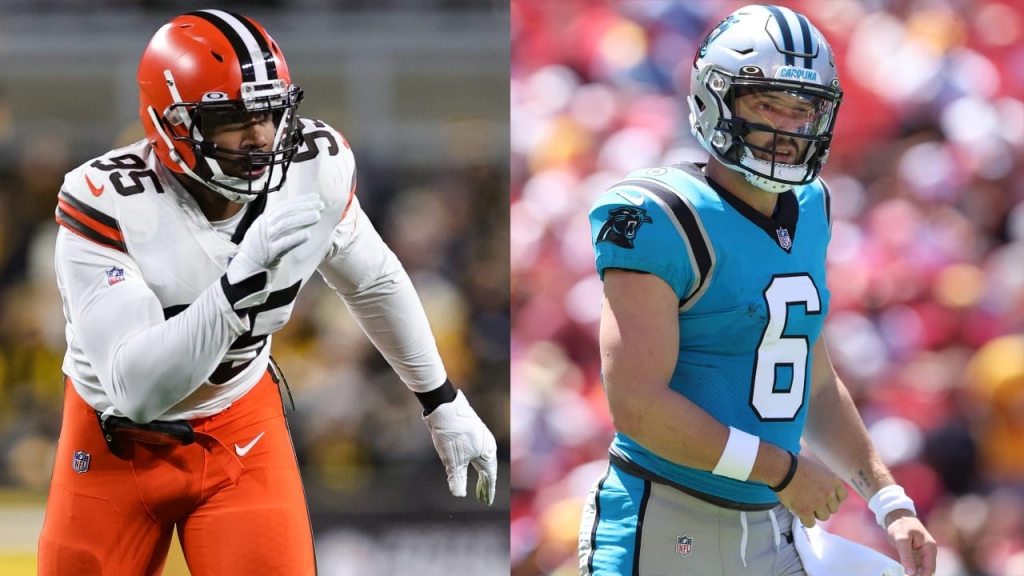 The Cleveland Browns and former No.1 overall pick Baker Mayfield didn’t end in good terms. After months of jostling, and the Browns trading for Deshaun Watson, Mayfield was dealt to the Panthers in early Julyz. While the Browns did pick up the fifth-yes option of Mayfield’s deal, they weren’t willing to commit to him long term. Instead opting to trade for the embattled Watson, while giving him the biggest fully-guaranteed deal (five-years,$230 million) in NFL history.

The trade also brings intrigue as the Browns travel to face the Panthers in Week 1 of the NFL season. A chance for the emotional and charismatic Mayfield to prove to his former team they made a mistake.

“I walked up to him and said, I’m so excited to see you, like go kick some butt, I didn’t say that word. Go kick some butt, especially Week 1, I like cannot wait. And he uses some expletives and I was like, I just hope you’re ready. He was like, I’m gonna bleep them up.”

Mayfield is no stranger to controversial comments or actions on the gridiron. Who can forget him grabbing himself in a lewd way towards the opponents sideline while at Oklahoma. He also stuck the OU flag in the turf at midlfield after the Sooners won at Ohio State. That’s just two instances where Mayfield showed how he can be a bit of a hothead. So him speaking in that manner isn’t all that surprising.

Garrett and Mayfield were never the best of friends, but there was a mutual respect between the two former No.1 picks. And Garrett elaborated on Mayfield’s demeanor and how he carries himself. “Flash” Garrett told Cleveland.com this ….

“We’ve known he has that type of demeanor and that attitude, and for better or for worse, it works for him. And I’m not mad at him using that fire and that chip to help him play to the level he has. He’s been successful in what he’s done.”

“Talking like that and moving the way he does, it’s worked for him. He uses that for fire, for motivation and I think speaking like that helps amp him up.”

Garrett also mentioned that Baker’s comments will be used as a bit of motivation for the Browns.

Browns coach Kevin Stefanski isn’t feeding into Mayfield’s comments at all stating that nothing about what Mayfield said was going around in the locker room …. And when asked if it’d be used as bulletin board material the 2020 NFL Coach of the Year was blunt in his response with.

Mayfield will be playing on the fifth-year option from Cleveland. He also knows he needs to play well for the Panthers brass to be willing to give him a long term extension as season’s end.